Artists, Academics and Ancient Texts
25 May 2016 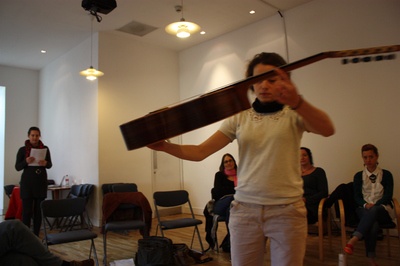 These Artists, Academics and Ancient Texts Performance Workshops, along with an additional performance in Glasgow, were generously funded by the Arts and Humanities Research Council through an Early Career Collaborative Skills Development grant, and kindly hosted by the Centre for Contemporary Arts in Glasgow and Seventeen, an Aberdeen City Council arts hub.

The team was led by Lisa Collison (Centre for Scandinavian Studies) and overseen by a multi-institution project board (Ruth Barker, Sue Brind, Stephen Broad, Tim Ingold, Lucy Leiper, Elizabeth Reeder, Michael Rossington and Ken Skeldon). The series was conceived and developed by Collinson and Barker, and began with an intensive three-day workshop on reading ancient texts, decision-making in creative work, use of voice and body, performance creation, and evaluation using Liz Lerman’s Critical Response Process (CRP), which was taught to the group by Elizabeth Reeder. This was followed by two day workshops, each ending with a public performance and CRP session.

The aim was to empower arts and humanities researchers to use ancient texts as bridges between past and present. We spotted an appetite for serious contemporary artworks drawing on such texts, but noticed that whilst traditional researchers often had the creative capacity and desire to develop such works, they rarely had the confidence to know how or where to start, whilst artists often felt unsure about sharing their responses to ancient texts with traditionalists. The solution was to offer relevant, simple, targeted training and confidence-building to researchers from a wide variety of backgrounds, who could then replicate the training for others. The ultimate goal was to develop a cohort of researchers who would use ancient texts in creative, confident and meaningful new ways, shedding light on our past, present and future.

The main beneficiaries of the project were the researchers, whose enhanced work could be expected to benefit future public audiences and colleagues from other disciplines. The researchers gained experience in developing original performances based on ancient texts (both individually and in collaboration), in working in contemporary art venues, and in understanding and evaluating contemporary art performances based on ancient texts. Collinson gained experience in applying successfully for national funding and running a short but innovative multi-institution project.

This programme has opened up several new research and public engagement directions for participants: