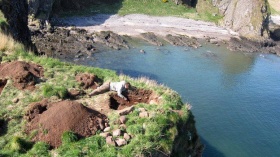 Television series 4:3. North details archaeological site progress at Dunnicaer and Rhynie with Dr Gordon Noble and includes other interesting finds in the north.

Professor Alice Roberts delves into the archaeology and finds from the north of Britain over the past year and how Dr Gordon Noble's sites at Dunnicaer and Rhhynie have led to clues in the discovery of Scotland's first kingdoms.

This episode also features a hoard of Viking treasure that was found by metal detectorists and how a new housing development revealed an Iron Age warriors graveyard.