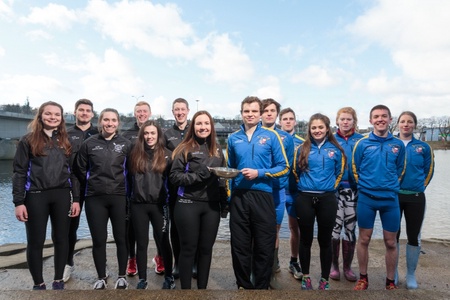 Hundreds of spectators are expected to line the River Dee this Saturday as Aberdeen's two universities go head to head in the annual Aberdeen Asset Management Universities' Boat Race.

The event is Scotland’s longest running boat race, and will see crews from the University of Aberdeen and Robert Gordon University battle it out against each other in a gruelling 3.5km race from the Bridge of Dee to Aberdeen Boat Club, starting at 4pm.

The University of Aberdeen will be out for revenge following their defeat last year, and the crew of nine has been hand-picked by Aberdeen University Boat Club (AUBC) President Ian Walker on the basis of their technique and determination.

Commenting ahead of the race, Ian said: “We are looking forward to the race and are feeling good about our chances. We've been training hard and are ready to take on the challenge. We expect it to be close but think that we can come out on top.

“It’s a huge event in the local rowing calendar and there is always a large amount of support on the banks which definitely helps us on the water.

In order to generate interest and encourage more spectators to the event, crew members have produced a parody of Adele’s hit ‘Rolling in the Deep’ – ably assisted by the University of Aberdeen’s Music Department - which is available to watch here.

Professor Sir Ian Diamond, Principal and Vice-Chancellor of University of Aberdeen said: “The friendly rivalry between both universities reaches its peak during the boat race.

“Our students always turn out in force to support the University of Aberdeen team, which I know means a lot to the boat crew and helps to give them a big boost on the day of the race.  Both clubs always perform exceptionally well, but I’m hopeful that this will be our year.”

We've been training hard and are ready to take on the challenge. We expect it to be close but think that we can come out on top." Ian Walker, Aberdeen University Boat Club President

“Both crews have continued to train very hard throughout a difficult winter; by doing so they have all shown sheer determination, enthusiasm and commitment towards rowing.  Aberdeen Asset Management is dedicated to supporting young talent, and it’s always rewarding to see the achievements both teams have made.”

The University of Aberdeen crew members are: Ian Walker (21) from Edinburgh, Henry Pettinger-Harte (20) from Chester, Laurence Jennings (18) from Aberdeen, Marvin Mücke (21) from Detmold in Germany, Fiona Bell (20) from Glasgow, Isla Ferguson (19) from Edinburgh, Jose van Paassen (26) from Schipluiden in the Netherlands, and Lianne Stevenson (22) from Kirkwall. The cox is Alex Ralston (19) from Perth in Australia.

*For students wishing to attend the boat race, a number of free shuttle buses have been arranged. The University of Aberdeen spectators bus will pick up from Hillhead Turning Circle (12.15pm), Aberdeen Sports Village (12.30pm) and the Tilted Wig, Union Street (12.45pm).

Event schedule: Following the toss for stations at 1.50pm, during which the crews will decide which side of the river they will row on, the alumni crews will race at 2.35pm. This will be followed by the boat club novices, who will race in the Universities’ Second Crew Race at 2.55pm.

The media challenge will see reigning champions Original 106 FM take on challengers Evening Express, STV and BBC in a short-course doubles race at 3.40pm. The title race then takes place at 4.00pm, followed by the presentation of trophies at 4.30pm.

Spectators are free to stand along the length of the course to cheer on the crews, however the best viewing locations are considered the Queen Elizabeth II Bridge, the Wellington Suspension Bridge and the finish line at the Aberdeen Boat Club.