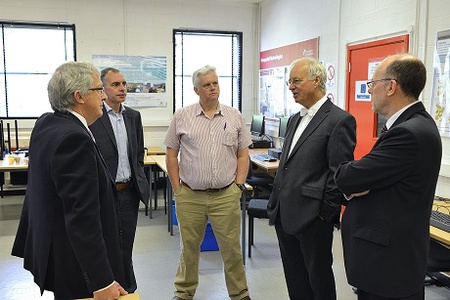 Former Director General of the Ordnance Survey (OS) - the UK's National Mapping Agency - and a past Vice-Chancellor of City University, London. His academic career has included positions at the University of Edinburgh, the Royal College of Art, the University of Durham, and Birkbeck, University of London - where he was Professor of Geography and Dean of the Faculty of Economics.

Prior to the degree ceremony, Professor Rhind was hosted at a reception in the Department of Geography and Environment’s MSc in GIS lab, where he was received by a number of staff from the School of Geosciences and the Business School. The reception, organised by David R. Green (Director of the MSc in GIS), was particularly fitting given Professor Rhind’s prominent and lengthy international career in Geographical Information Systems (GIS), cartography, and digital mapping.

During his visit, Professor Rhind presented the MSc in GIS degree programme with a copy of his most recent co-authored GIS textbook - the 4th Edition of Geographic Information Science and Systems, and observed that, in his experience, even if you do not directly use your subject knowledge, you will always certainly need the forensic analysis, problem-solving and presentation skills, the imagination, and the ability to work with a wide range of people…. which you will have developed in Aberdeen.