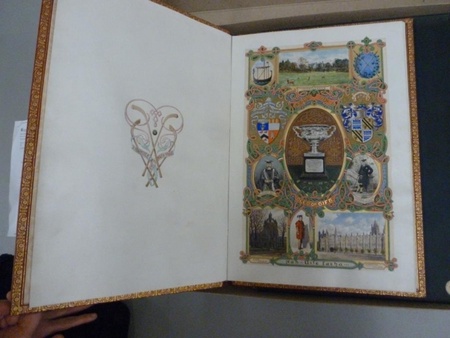 On the anniversary of an unprecedented and historic sporting contest between shinty and football clubs, a new exhibition launched at the Hampden Football Museum.

Featuring  some of shinty’s ‘greatest historical and most spectacular artefacts’, loaned from the University of Aberdeen’s, it began on the same day an unusual challenge match was held between two of Scotland’s oldest institutions.

On January 17 1859, the Shinty Club of King’s College in Aberdeen lined up against the football team of the city’s Marischal College. An account of the contest appeared in the Aberdeen Herald and General Advertiser on 22nd January 1859, stated: ‘he Shinty Club of King's College having accepted a challenge from the Foot-ball Club of Marischal College, to play three games at shinty and three at foot-ball, the match came off on the links on Saturday. Owing to the games being keenly contested, three games at shinty and only one at foot-ball were concluded, all in favour of the King's Club’.

Just a year later, in 1860, King’s College and Marischal College merged to form the University of Aberdeen and the Aberdeen University Shinty Club - the world’s oldest constituted shinty club - was founded in 1861.

The document which established the shinty club is one of the highlights of the exhibition. It will be displayed together with the Littlejohn trophy and Album, also loaned by the University of Aberdeen Special Collections.

Commentating on the loan of the valuable items, broadcaster and shinty historian Hugh Dan MacLennan of Edinburgh University said: "The Littlejohn Trophy and album are two of shinty’s greatest historical and most spectacular artefacts and we are indebted to the University of Aberdeen for allowing us to include such an important part of the sport’s history in the Hampden exhibition.  The University club’s foundation document is hugely significant also, and for us to be able to show the three items together in the national stadium is a great privilege and I hope the shinty community will come and see them in this unique setting.  And once again our researches have unearthed some remarkable historical information which adds to the rich tapestry of the game.”

Siobhan Convery, Head of Special Collections at Aberdeen University, said: “The University has a long and proud history of sporting achievements and we are delighted that these treasures relating to shinty’s early history can be enjoyed by a wider audience.”

Richard McBrearty, Curator of the Scottish Football Museum said: “We are delighted to host the exhibition on shinty within the museum at Hampden Park and are very grateful to Aberdeen University Special Collections and Museums for kindly agreeing to loan these truly historic sporting items. The details surrounding the historic contest of 1859 have only recently been discovered and it is a complete coincidence that the display of the Aberdeen University shinty items falls on the anniversary of the historic contest of 1859. It serves to remind us of the significant connections between shinty and football in Scotland and of the rich sporting traditions of Aberdeen University.”

1)      Shinty and football is recorded at Aberdeen’s King’s College as far back as the seventeenth century; three times a week students were permitted to go out onto the links for recreation where they enjoyed playing football, shinty and golf.

2)      Whilst Aberdeen University Shinty Club is the oldest “constituted” shinty club in the world it is not the first shinty club to be recorded. A “North of Spey” Shinty Club is reported to have existed in Aberdeen as early as 1849 and is the earliest known club.

3)      George Keith, 5th Earl of Marischal, who founded Marischal College in 1593, was himself a keen footballer. In the 1580s he got into a quarrel with Francis Stewart, 5th Earl of Bothwell, after a bad football tackle led to an altercation. Only an intervention from King James VI stopped the two noblemen from settling matters with a duel.

4)      Shinty has been played throughout Scotland, even in St Kilda and the Borders, but never in Orkney or Shetland.

5)      The “Paisley Football and Shinty Club”, founded in 1855, is the only known club to have been devoted entirely to both sports.

7)      Rangers FC are said to have supplied the original blue and white strips which have been carried with distinction by Kyles Athletic.

8)      A number of top footballers were noted shinty players in their day, notably Duncan Shearer, ex Aberdeen and Chelsea, and Donald Park of Inverness Caledonian, Hearts, Hibs and Partick Thistle.

9)      Shinty has been played at a number of famous sporting venues in Glasgow, including Hampden Park, Parkhead and Ibrox.

10)  Several football teams and stadia in England have a shinty connection such as Nottingham Forest, Old Trafford and Stamford Bridge.