Why is Sweden tightening its borders after years of welcoming migrants?
14 January 2016 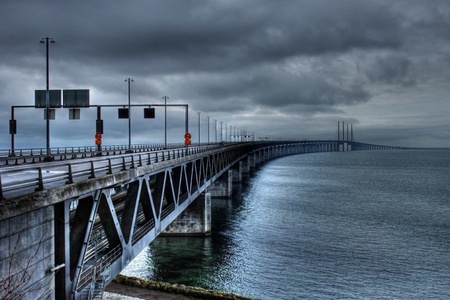 The Conversation recently published an article by Anders Widfeldt, Lecturer in Nordic Politics at the University of Aberdeen, highlighting changes to Sweden's refugee policy.

Sweden’s decision to introduce identity checks on all incoming traffic from Denmark represents a significant step away from what was, until recently, among the most generous refugee policies in Europe.

Since January 4, anyone crossing the famous bridge between the two countries (or boarding a ferry) has had to show their documents, as part of a bid to cut down on migrant and refugee numbers. Denmark has responded by tightening its own border with Germany.

Relative to its own population Sweden has, together with Germany, received the highest number of asylum seekers in the EU in recent years. Developments in 2015, however, have forced the government into a more restrictive approach. Unprecedented numbers are entering Sweden to apply for asylum.

Over the years, Sweden has built a reputation as tolerant, open and consensual. True, this image has been tarnished by the assassinations of a prime minister and a foreign secretary, riots in Stockholm and the presence of criminal gangs. It could, nevertheless, still be argued that the country has been able to absorb high levels of immigration without widespread serious social and political tensions.

Fredrik Reinfeldt, the former Conservative prime minister, illustrated the pro-immigration approach in 2014 when he said Swedes must “open their hearts” to the people arriving from countries such as Syria and Iraq.

For many years Sweden was one of the few European countries without a strong anti-immigration party. The generous asylum policy was supported by parties on both sides of the traditional left-right political divide.

But tensions have grown in recent years and the far right has profited. The anti-immigration Sweden Democrats, for many years an irrelevance, entered parliament in 2010 and more than doubled its representation in 2014. The party is currently enjoying 20% support in opinion polls, and has taken the opportunity to make political capital out of the immigration situation.

The party has put up English-language posters at Stockholm underground stations apologising for immigrant begging and distributed leaflets on the Mediterranean island of Lesbos discouraging refugees from going to Sweden.

To an extent, the restrictive turn taken by the government (a minority coalition between the Social Democrats and the Green Party) is an attempt to stop the growth of the Sweden Democrats. By taking a tougher stance, the government hopes to bridge the gap between an essentially pro-immigration political system and a more sceptical general public.

At least as important, however, are purely practical and economic considerations. The current asylum situation is unprecedented, even comparable to the Balkan crisis in the 1990s.

Over the course of 2015, it became increasingly difficult to find accommodation for the refugees. There were reports of deploying gymnasiums, churches and camps of tents. Local councils from across the country claim they are no longer able to bear the expense of the growing numbers of refugees.

On a more positive note, the restrictive immigration politics have not, so far, been accompanied by a more hostile rhetoric. The government’s position is that tighter controls are needed to make it possible to treat new and existing asylum seekers with dignity and humanity. The Swedish government has also repeatedly asked other EU countries to take more responsibility for the refugee crisis.

Still, the change is moving the country in a new direction. It will make it impossible for refugees to enter the country. In practice, that means they will have to apply for asylum in another country.

It goes without saying that the ID checks will affect regular travel between Denmark and Sweden. On average circa 95,000 people travel between the two countries every day – including 15,000 people commuting for work. The delays caused by the checks could force some commuters to give up their employment in the other country, and concerns have been raised about the effects on the regional economy.

These concerns could be extended to the entire EU, where the free movement of people and capital are core values. The current development, with checks and restrictions spreading from country to country in a kind of domino effect, could have serious consequences for trade and tourism. In the longer term, they represent a threat to the very raison d’être of the European Union.