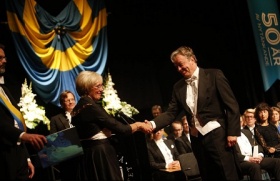 Professor Stefan Brink, Centre for Scandinavian Studies, has been awarded the 'Language and Culture Trust's Prize' for 2015 at a recent ceremony celebrating 50 years of Umeå University.

Professor Brink received the award for his wide ranging and inter-disciplinary research in political and social structures in early Scandinavia, for studies on the Scandinavian parish formation, on the Nordic landscape, especially in a diachronic perspective, the Christianization process and Nordic slavery in the Viking Age.

The Prize was awarded by the Vice-Chancellor of the University, Professor Lena Gustafsson, during the academic prize ceremony on 17 October, in the presence of His Majesty, King Carl XVI Gustaf.