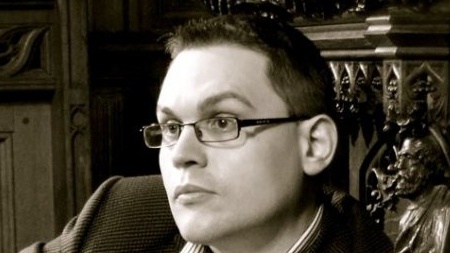 A 'world premiere' in Aberdeen will mark the culmination of a lifetime's ambition and a milestone birthday for the nation's 'favourite living composer'.

Professor Paul Mealor, from the University of Aberdeen, has spent the last 25 years planning his new work ‘Passiontide’, which is the longest piece he has ever undertaken.

Lasting 70 minutes, ‘Symphony Number 1: Passiontide’ will premiere at St Machar Cathedral, performed by singers and musicians from the Orchestra of Scottish Opera and the University’s Chamber Choir and Marischal Chamber Orchestra.

Professor Mealor, who has enjoyed world-wide success with his work performed at the Royal Wedding, BBC Proms, the Military Wives Choir and Gareth Malone and numerous Royal events, said it was an honour for the first performance of his symphony to be held in the city he has called home for the last 14 years.

Voted the ‘nation’s favourite living composer’ by Classic FM Hall of Fame in 2012, his vocal music has been performed by orchestras and choruses across the globe but this is his first foray into extended musical composition.

Professor Mealor said: “This is a piece I’ve wanted to write all my life and I first had the idea for it 25 years ago but it has taken until now – a week before my 40th birthday – to bring it to fruition.

“I began writing the symphony seriously in 2009 and it has taken six years to complete. Lasting 70 minutes it is by-far the longest piece I have ever written.

“The work has a strong religious influence, tracing the journey from the crucifixion of Christ through to his resurrection, so it is fitting that the premiere should be held in the magnificent surroundings of Aberdeen’s St Machar Cathedral.

“It is a very warm piece and I hope it will appeal to anyone with an interest in the beauty of music.”

The concert will take place on Thursday November 19 under the baton of the world-renowned conductor James Jordan.  It will also feature solo performances from Aberdeen graduate and soprano Jillian Bain Christie and American baritone Sean McCarther.

Professor Mealor said he was delighted professional and student musicians would be coming together to perform his new work in public for the first time.

“I wrote the last part of the piece specifically with the University’s Chamber Choir in mind so it was important they were part of the premiere,” he added.

“I have worked with the Chamber Choir for the last 12 years and it is gaining a strong international reputation having been invited to perform recently at the BBC Proms and at Balmoral for HM The Queen.

“It is a wonderful opportunity for our students to learn from working with professional musicians of such a high calibre and to be conducted by someone with the profile of James Jordan.

“For me, it is a great honour for this work to be performed in the city I have called home for the last 14 years and with so many of my friends and family able to come it will be a great early birthday present as I turn 40 next week.”

“Being part of the Chamber Choir and working with Paul Mealor has been an incredible and invaluable experience so I’m delighted to be a part of his premiere,” added the 22-year-old from Greenock.

“We’ve been lucky enough to go on tour to Belgium and Northern Ireland, to sing in the BBC Youth Proms and we have had the honour of singing for Her Majesty the Queen twice.

“This is another wonderful opportunity as we will be working with one of best conductors and singers in our field. Under James Jordan I’m sure ‘Passiontide’ will be an unforgettable experience for both choir and audience members alike.”

Tickets are £10/ £5 concessions and places should be reserved online at http://www.abdn.ac.uk/events/7941/ with payment taken on the door.