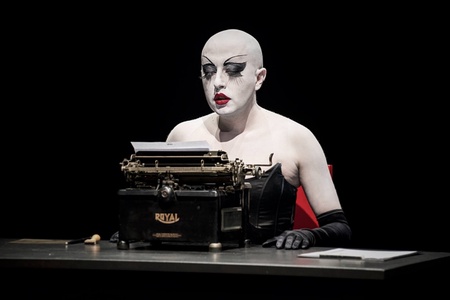 The University of Aberdeen will host a major performance art conference which will see several artists demonstrate their work around the campus.

Experts in the art form from Bulgaria, Serbia, the Czech Republic, Croatia and the UK will join forces with performance artists to discuss the development of the discipline in the East.

In Eastern Europe, performance art, meaning live actions and body art by visual artists, was not officially accepted as an art form by the authorities, and therefore the art form developed largely underground. For this reason, less is known about Eastern European performance art than in the West.

Dr Amy Bryzgel, from the University of Aberdeen, said this was the motivation behind the event, running from October 30-31.

“The conference aims to explore the development of performance art in Eastern Europe, North America, and the Northeast of Scotland, highlighting connections and networks between artists on both sides of the Berlin Wall,” she said.

“Little is known about the development of performance art in the East and we want to address those gaps in our knowledge. However, we didn’t want the event to be a purely academic exercise, after all performance art is to be enjoyed, so the conference brings together not only researchers who focus on this region of the world, but also performance artists themselves.

This is a great opportunity for anyone interested in this art form to learn more about an often overlooked region which is home to a large number of talented performance artists and researchers." Dr Amy Bryzgel

“We have also joined forces with Peacock Visual Arts and their This Is Performance Art (TIPA) series which will run across the same weekend to offer the public a real insight into this exciting art form.”

As part of the event, Croatian artist Božidar Jurjevićhas planned a performance on the Academic Plaza outside the Sir Duncan Rice Library which will utilize the sculpture Evolutionary Loop 517.

The conference is free and open to members of the public but booking is required by visiting www.abdn.ac.uk/events/8018/

Dr Brygel, a lecturer in Film and Visual Culture, added: “Despite the fact that the Iron Curtain divided artists in the communist countries of Central and Eastern Europe from the West, artistic exchanges still managed to take place.

“It is important to highlight the fact that it was artists, often working in a grey area between culture and politics, were among those who managed to defy borders through their art.

“This is a great opportunity for anyone interested in this art form to learn more about an often overlooked region which is home to a large number of talented performance artists and researchers.”