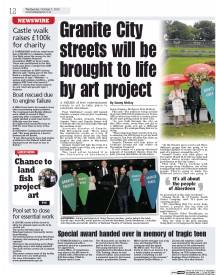 Lead artist Professor Pete Stollery, Head of Music is behind a series of free entertainment events that will celebrate Aberdeen. Four 'trailblazer' events will launch Granite, a major arts project in November 2015.

Presented by the National Theatre of Scotland and Aberdeen City Council, Granite is a major new Aberdeen arts project celebrating the city and its people. From November to December 2015, a series of family-friendly, free performances and installations will bring the city centre’s streets to life, exploring the city’s past, present and future – and its relationship with the famous stone. The first of these is Granite Sound, a pair of one-hour guided sound walks with accompanying radiophonic soundtrack listened to over headphones. A number of locations, or dwelling points, will be joined together via the walk and will reflect an aspect of granite and the history of Aberdeen through sound, and around themes of excavating and exporting. Granite Sound happens on Saturday and Sunday 7/8 November 2015 and walk times are 1000, 1200, 1400 and 1600 on each day. Saturday’s walk begins at Seventeen on Belmont Street (AB10 1JR) and travels via Union Terrace, Guild Street, Union Square, Market Street, Victoria Bridge and Walker Road to the finish point at Walker Road Primary School. Sunday’s walk begins at Castlegate (AB11 5BB) and travel via Castle Street, Castle Terrace, Virginia Street, Union Square, Guild Street and College Street to the finish over the Wellington Suspension Bridge.

Composed by sound artists Pete Stollery and Suk-Jun Kim, and featuring vocal music composer by Philip Cooke as well as poems and text from local writers, the soundtrack will be triggered via GPS depending on the location of the walkers. Each walk has a number of dwelling points where walkers will pause and contemplate their location both visually and aurally and a central focus for both walks will be Union Square Shopping Centre where walkers and the general public will be able to interact with and trigger sounds via an environment created by Bea Dawking, Mark Dunsmore, John Montgomery and Stuart Docherty, all students from the MMus Sonic Arts programme at the University of Aberdeen. SHMU will broadcast excerpt from the walks live on SHMU-FM.

“This has been an amazing experience. SERG (Sound Emporium Research Group), the sonic art research group at the University of Aberdeen has been recording sounds in and around Aberdeen and presenting sound installations and other sound art works throughout the city for a number of years, but this project allows us to work with NTS as well as being part of the sound festival and work with some really exciting composers, writers and members of the public"