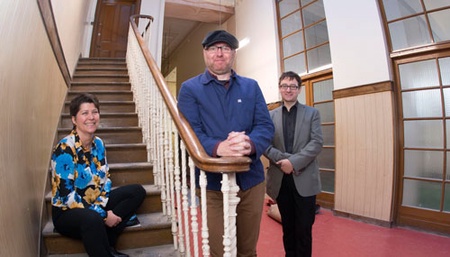 The Anatomy Rooms, Aberdeen's first independent, artist-led studio and production centre, has secured the funding to transform disused University of Aberdeen classrooms in part of Marischal College, Broad Street, into a mix of studios, workshops and project rooms.

The new initiative to encourage Aberdeen artists to stay in the city and support the growth of the region’s cultural scene has been given a major boost after being awarded £55,000 from Aberdeen City Council.

As the name suggests, the new centre is based in the former anatomy rooms of the University of Aberdeen, which have lain vacant since the medical teaching moved to the purpose-built Suttie Centre at Foresterhill in 2009.

The venture, which has also secured charitable status, is due to open later in the autumn following a refurbishment. It will nurture creative talent by providing opportunities for artists to work, collaborate and be mentored. Ultimately, the support will help emerging artists carve out a career within the creative sector.

Jim Ewen, Director of The Anatomy Rooms said: “The high cost of living and rent makes it virtually impossible for artists to stay in Aberdeen and build a career for themselves. The Anatomy Rooms will play an important part in reversing that creative drain.

“We’re very grateful to both Aberdeen City Council for their generous investment and to the University of Aberdeen for leasing us the space. Their support allows us to realise our vision of developing a creative venue that will benefit both those artists who use the centre and the wider community.

“Local artists are leading this project and so we will tailor our support to deliver maximum benefits to the region’s creative community.”

We're delighted to be supporting this new venture. The most exciting outputs often arise from bringing different creative people and ideas together, and we're particularly keen to explore new collaborations between the resident artists and our own students and staff from the University." Dr Ken Skeldon, Head of Public Engagement with Research at the University of Aberdeen

Deputy Leader of Aberdeen City Council, Councillor Marie Boulton, said: “As a Council we are committed to supporting the ongoing development of arts and culture in Aberdeen.

“The Anatomy Rooms forms the centrepiece of Aberdeen City Council’s drive to provide affordable works spaces for artists and by doing so we will retain and attract more creative talent to the city. This in turn will also encourage the diversification of the local economy through growing the creative sector.”

Dr Ken Skeldon, Head of Public Engagement with Research at the University of Aberdeen added: “We’re delighted to be supporting this new venture. The most exciting outputs often arise from bringing different creative people and ideas together, and we’re particularly keen to explore new collaborations between the resident artists and our own students and staff from the University.”

Mr Ewen, a graduate of Robert Gordon University’s Gray’s School of Art, has played an active role within the region’s cultural community. He was the managing director of popular music venue Dr Drakes until its closure in 2005 and has been involved with a range of arts focused businesses and organisations. More recently, he was the exhibitions officer for Aberdeen Museums and Galleries.