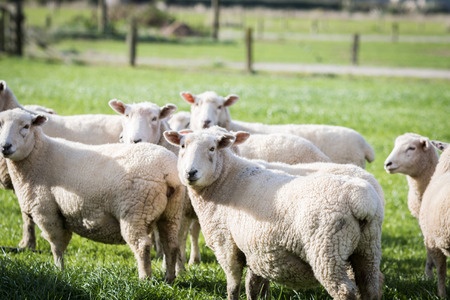 We find ourselves counting them in order to get to sleep, but sheep themselves may be anything but woolly when it comes to mathematics.

The animal world is full of fascinating examples of collective behaviour by animals small and large, the mechanism and evolutionary importance of which has long intrigued scientists – including any hints it provides of human behaviour in dangerous or stressful situations.

A collaborative study published this week in the Proceedings of the National Academy of Sciences from the University of Aberdeen and a French consortium suggests that the success of a flock of sheep in maximising feeding time while avoiding themselves becoming fodder for hungry predators can all be explained by mathematical equations.

The quantitative field study of the behaviour of a flock of gregarious merino sheep has enabled a team of researchers led by Dr Francesco Ginelli at the University of Aberdeen to develop mathematical models to describe patterns of movement of the sheep which are likely to have evolved to allow the animals to survive by balancing their need for food with that of achieving group safety to avoid predator attack.

The social interactions and behavioural mechanisms of collective movement in large groups of creatures - such as starlings, shoals of fish and large swarms of midges - are believed to be responses which have adapted over time to enable the animals to cope with challenges such as finding food, and keeping safe. Dr Ginelli, a physicist and applied mathematician who researches complex and dynamical systems, was curious to learn how this might apply to the movement of sheep or other grazing animals, and how the behaviour of one individual could trigger a collective response by the group.

“This is the first quantitative study of this kind of behaviour,” says Dr Ginelli. “What we observed was normal grazing across the available territory, but punctuated by intermittent and sudden ‘avalanche-like’ regrouping of the grazing sheep. This suggests that a flock of sheep exhibits a balance between dispersing to explore the maximum area of space to feed, and the need to speedily regain contact with the other group members should a predator approach. And the mathematical model we developed supported this behaviour.

Cooperative behaviour in social groups is a very important issue in evolutionary biology. Our results may eventually help us to understand the behaviour of other groups of animals - including humans - in a stressful group situation." Dr Francesco Ginelli

“Cooperative behaviour in social groups is a very important issue in evolutionary biology. Our results may eventually help us to understand the behaviour of other groups of animals - including humans - in a stressful group situation.”

The researchers from the University of Aberdeen, CNRS Toulouse, CEA-Saclay and the University of Nice studied the behaviour of a flock of a hundred merino ewes at an experimental farm in the south of France. The sheep were allowed to roam freely inside an enclosure, and photos were taken from overhead at one-second intervals. The position of each sheep was then marked by hand on each frame.

What the researchers found was that, most of the time, the flock spread out slowly across the field, foraging as they went. But every once in a while and without any specific trigger, a sheep near the periphery would become aware of her isolation from the group and vulnerability to predators, and would sprint back into the centre for safety. As the first sheep runs, others start to follow it, clustering into the centre. Then a point is reached at which the animals stop moving and continue grazing as before, now in a densely packed group.

“Many animal species live in social groups,” continues Dr Ginelli. “Living in groups brings many benefits to individuals, providing enhanced protection against predators and in some cases a higher efficiency in finding food sources. In animal groups, imitating (or mimetic) behaviors are the cornerstone of many spectacular and intriguing collective phenomena, such as the murmurations exhibited by starling flocks. But this behaviour is complex, and individuals do not mimic each others with the same intensity over time.

“It seems that the intensity of individual mimetic behavior is determined by the relative importance that each animal grants the behaviour of its neighbours and by its own motivations. Understanding how these two types of influences combine to determine the decisions of each individual within a group is crucial for understanding the complex dynamics of many collective phenomena, in animals groups as much as in human crowds.

“These results also bring new elements to the current debate on the issue of ‘criticality’ of living systems. By being neither too disordered nor too rigidly organised the group is able to respond with high efficiency to external disturbances, an advantageous feature that could have been selected during evolution.”