City of Ghosts: A dialogue with George Washington Wilson
30 September 2015 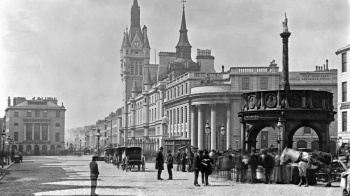 A new suite of photographs that pay homage to George Washington Wilson and the city he depicted.

In March 2015, when John Perivolaris embarked on a project to revisit and re-photograph some of the locations documented by George Washington Wilson over a hundred years earlier, he was less concerned with standing in the exact spot on which his Victorian counterpart had set up his camera. Instead, his aim was to create a sequence of contemporary images that would resonate with the past not simply attempt to replicate it.

It soon became clear that several of Wilson’s vantage points had disappeared or were now difficult to find, obscured by the barriers and security devices which regulate movement in contemporary cities. Compensation was to be found in the sweeping panoramas opened up by the roofs of Aberdeen’s numerous multi-storey car parks.

The resulting 15 contemporary photographs in this exhibition pay homage to George Washington Wilson, not only in seeking out comparable vistas, but through the use of an analogue camera and traditional techniques of production (silver bromide printing). In doing so, they capture the essence of a time past and a new presence for the city of Aberdeen. Set against a selection of reproductions from Wilson’s glass plate negatives and a soundscape created by Professor Pete Stollery, Chair of Music at Aberdeen University, the exhibition establishes a dialogue between an Aberdeen past and present.

The exhibition opens on 15th October and runs in conjunction with an exciting series of talks and walks. Details of these and how to book will be posted on the Special Collections Events website.