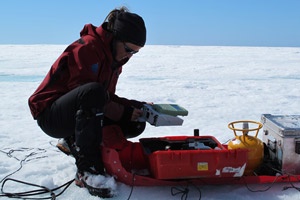 The funded project, titled "Ice climate relations during the Late Quaternary in Northern Spain" will investigate the evolution of glaciers during the Late Pleistocene and into the Holocene in two sites in the Cantabrian Range (NW Spain).

Dr. Ramón Pellitero, postdoctoral researcher in the Glaciology group, has been awarded a Dudley Stamp Memorial Award of £500 by the Royal Geographical Society (with IBG).

This project joins nine European researchers for the purpose of determining the palaeoclimatic conditions that led to extensive deglaciation in Europe during the Younger Dryas by reconstructing the surface of palaeoglaciers from Svalbard to Morocco and from W Spain to Turkey.