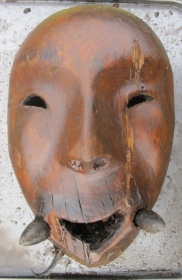 Nunalleq finds that just get better and better!

The Nunalleq project is one of Aberdeen's flagship projects - and for a good reason! The archaeology is spectacular and plentiful, and the preservation is amazing. Commencing in late June, this year's field season is now well under way, and the finds so far include ulus, needles, fish lures, dolls and fantastic masks like the one pictured.

The Nunalleq site is a precontact Yup'ik village site in Western Alaska, inhabited between around 1350 and 1700AD.

News from the crew, including a quick Skype interview with fieldschool director, Dr. Charlotta Hillerdal, hinted that very important structural discoveries were also being made at the site and it was hoped that the boundaries of the house currently being excavated can be reached during this season.

This year, along with excavations, onsite (and offsite) palaeoecological sampling is going to allow the reconstruction of past living conditions and the local climate, using preserved insect and plant remains, and pollen.

For the latest on the Nunalleq site and the project as a whole, please follow the wordpress blog here.

Image (credit: The Nunalleq Blog/Nunalleq Project): A wooden mask with ivory insets and beard/whiskers made out of human hair & walrus whiskers, found at the Nunalleq site.