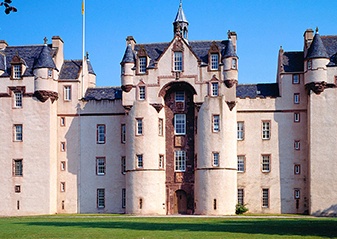 Research conducted at the University of Aberdeen underpins a new guide exploring the rich architecture of north Aberdeenshire and Moray.

It is the result of several years of research conducted by Dr David Walker and Dr Matthew Woodworth in their time as research fellows of Aberdeen University, with assistance from Professor Jane Geddes.

Professor Geddes, who lectures in the History of Art, said this took them on a fascinating journey, uncovering the stories behind buildings ranging from castles and country houses, to distilleries, mills and lighthouses, as well as public buildings such as swimming pools and libraries and churches and their furnishings are covered in particular detail.

It is this kind of detail, and the stories behind the buildings, which makes this such an interesting book" Professor Jane Geddes

“These surveys led to many exciting encounters with snow drifts, ditches, and guard dogs, as well as numerous home owners, she said.

“At Delgatie Castle, near Turriff a group of us were investigating some modern panelling along a passage in the castle. One panel sounded hollow and the housekeeper told us it was just the electricity cupboard. With great difficulty she unlocked a small door in the panelling and behind it lay a scramble of electric wires. However, dimly behind the wires we could see that there was a small dark passage within the thickness of the wall.

“As David Walker was the youngest and slimmest, we asked him to investigate, wriggling head first into the blind dark tunnel through the electrical spaghetti, with only his phone torch for light. Soon only the soles of his feet were visible. He wriggled and grunted, took a photo and then reversed. Gaping below him was a huge void, held up by exquisite vault ribs and a carved boss. It was the secretly hidden Catholic oratory which had once led off the great hall but had been blocked off and forgotten after the Reformation.

“It is this kind of detail, and the stories behind the buildings, which makes this such an interesting book.”

The publication of the volume brings the total of Pevsner Guides to 13 and there are plans for a guide to Aberdeenshire South and Aberdeen City to be released later in the year.

The series began with major sponsorship from the National Trust for Scotland and Historic Scotland, but the two Aberdeenshire volumes were supported by many sources including the principal donors: The Leverhulme Trust, The Paul Mellon Centre for Studies in British Art, The Royal Commission on the Ancient and Historical Monuments of Scotland, and Aberdeen University Development Trust and Friends of Aberdeen University Library.