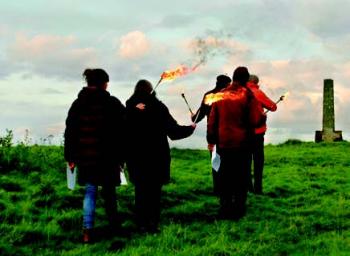 How to recreate a Viking funeral - minus the human sacrifice 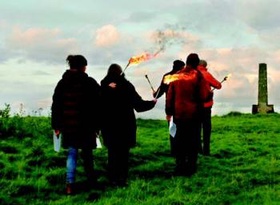 Recent article published in The Conversation.

When most people think of Vikings, they think of the usual stuff: longships, raiding, fighting, loot, burial and paganism. Scholars are increasingly aware that the reality was more complicated, but no doubt the popular associations will remain – and are reinforced by the likes of last year’s Viking exhibition at the British Museum in London.

Yet one aspect of Viking culture that gets little attention is funeral rites. There are very few sources that allow us to reconstruct in precise detail what happened during these complex ceremonies – there are no descriptions of funerals in Scotland, for example. But we can get a sense of Vikings' burial custom from a 10th-century eye-witness account from Russia by the famous Arab traveller Ahmad ibn Fadlan, and from some references in the ancient poem Beowulf.

Our re-enactment gave some indication of how elaborate and spectacular a Viking funeral could be. To help understand what these ceremonies could be like and the likely effect on the participants, we carried out a re-enactment project on Kildonnan on the western Scottish Isle of Eigg.

Further information can be found in the recent article published in The Conversation: http://theconversation.com/how-to-recreate-a-viking-funeral-minus-the-human-sacrifice-39090

Please share this article amongst your networks and to help secure the widest possible audience for you and other authors, please encourage others to sign up to The Conversation's newsletter