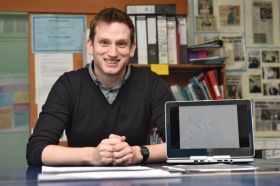 A scientist with autism has used his own experiences to aid the completion of a study which challenges some of the most commonly-held beliefs about the condition.


Dr James Cusack, from the University of Aberdeen, argues that generalisations about people with autism being poorer at interpreting gestures and body language may be exaggerated, and could be overcome by developing their ability to pay attention to signals in their brain which may otherwise go unnoticed.

The findings, published in the prestigious Journal of Neuroscience, are the result of a four-year study conducted with a group of adolescents with autism from Aberdeen, and it is hoped the results could bring scientists closer to understanding the condition and unlock the potential of others with the disability.

Those taking part in the study were shown a series of human action sequences, created using technology which reduces figures to a series of dots, and then asked to distinguish between similar actions such as dancing and fighting – something which it is commonly believed those with autism have greater difficulty in determining.

The results showed that their ability to detect these subtle differences was significantly higher than that identified by previous research.

The findings parallel developments within Dr Cusack’s own life by demonstrating that the impairment in those with autism could potentially be overcome if they could be directed to interpret what they see more effectively.

Dr Cusack was told at the age of 12 that he may need residential care for the rest of his life to support his individual needs. Instead, thanks to the targeted education he received at the specialist autism unit within Dyce Academy, Aberdeen, he went on to excel first at school and then at university, gaining a doctorate in biomedical sciences and becoming a research fellow at the University of Aberdeen.

Dr Cusack said: “Autism is generally associated with poor communication and social skills, which were thought possibly to stem from a difficulty with interpreting other people’s gestures and body language.

“There are several theories that rely on this notion, but most of these theories are based on very little data so we wanted to test this concept more thoroughly.  My own diagnosis and experiences aided the design of powerful tests that could more accurately control for factors not directly linked to autism - such as ensuring test requirements were fully understood and that experiments were conducted in an appropriate environment.

“When we take account of these other factors properly, the results showed only a slight impairment and this was more of a generalised deficit which might instead be attributed to factors such as the ability to pay attention, rather than autism specifically.”

Dr Cusack’s doctoral project was jointly supervised by Dr Peter Neri, a leading visual scientist from the University of Aberdeen, and Dr Justin Williams, a psychiatrist who pioneered influential theories of autism, also based at the University. The researchers were supported by the Medical Research Council and the Royal Society.

Autism is generally associated with poor communication and social skills, which were thought possibly to stem from a difficulty with interpreting other people's gestures and body language. There are several theories that rely on this notion, but most of these theories are based on very little data so we wanted to test this concept more thoroughly." Dr James Cusack

Dr Neri said that the results of these experiments clearly demonstrate that problems with the perception of action by those with autism occur not at the stage of identifying movement, but in interpreting it effectively.

He added: “We had expected to see impairments of the sensory system – the first part of the brain that determines the action they see when shown the human motion simulations, for example confusion between similar actions such as dancing or fighting, as many previous studies have proposed.

“But what we found is that this region of the brain functions perfectly. Instead, difficulties seem to arise at a later stage of cognition in a different brain system, which informs what we should do in response to an action, often termed the ‘executive function’.

“Although we do not know exactly what happens here, by identifying that this is where the impairment occurs is extremely significant.

“The sensory parts of the brain are extremely complex and largely resistant to modification after the first few years of early life, so that any impairment here would be very difficult to counter. It is well known, however, that the executive functions of the brain can be can be ‘trained’ to make use of these sensory inputs more effectively, for example in the way that an artist would see colours.

“We believe that autistic individuals may not be able to pay proper attention to the signals, but the signals themselves are intact.”

Dr Justin Williams further explained: “Many people with autism are disabled by sensory symptoms. It is important to know that the brain’s sensory systems are functioning well in autism. This suggests that we need to focus upon the way that the brain modulates the way that sensory input is experienced”.

Dr Cusack said the findings were of great significance as they demonstrate that deficiencies in perception for those with autism may not be as widespread as previously thought – and opens up new possibilities to help people manage the condition.

“I know from personal experience the benefit that a greater understanding of autism can bring,” he added.

“When I began secondary school it was expected that I would need to be fully supported for the rest of my life, but I was given a place at a specialist ‘base’ within a mainstream school and it completely transformed my educational experience.

“I went from an expectation that I would not sit any exams to achieving straight ones in my Standard Grades, and then gaining Highers which enabled me to attend the University of Aberdeen where I obtained a psychology degree.

“I then completed my degree and PhD, met my wife who is training to be a GP, and have a baby daughter. I couldn’t have imagined I’d achieve any of this when given my diagnosis aged 12.

“I hope our findings bring us closer to understanding autism, and that treatments can be more appropriately targeted now that we have a greater understanding of the brain systems affected in action perception, which plays a key role in social development.

“I will now be taking these findings forward as more research is needed to fully understand exactly where the deficit lies at the level of executive function, which brain circuits are affected, and what interventions can be taken in order to restore function within those circuits. My goal is to identify the precise nature of the deficits associated with autism, and devise effective ways of counteracting them.

“Aberdeen is in many ways an ideal place for pursuing this goal, thanks to the world-class expertise available at the University and the invaluable help of schools such as Dyce Academy and the many participants who volunteered several hours of their time and efforts towards my experiments. I thank them all.

Christine Swabey, Chief Executive of leading UK Autism research charity Autistica said: “Having a study led by an individual on the spectrum is an extremely valuable approach, especially as it challenges much of what we have previously believed about social communication and autism.

“Autistica works to bridge the gap between researchers and what individuals and families with autism believe will make the most difference. This study highlights the need for more research into the condition to help develop evidence based interventions to aid individuals on the spectrum to lead fulfilling lives.”

The full academic paper is available to view online here