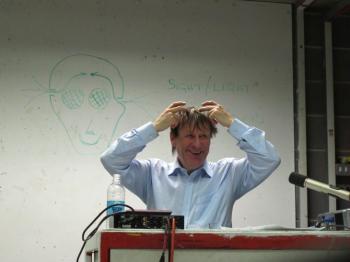 Professor Tim Ingold has been awarded the White Rose of Finland Medal and the Huxley Memorial Medal.

On Friday 7 November 2014 Professor Tim Ingold received the White Rose of Finland Medal, first class order, for his services in connection with Finnish universities over a number of years.

This honour was established by Mannerheim in his capacity as regent (temporary head of state) on January 28, 1919.It is the highest honour given to a foreign citizen and was awarded at the Finnish Ambassador's private residence in Kensington Palace Gardens.

It is awarded annually, by ballot of the Council, to a scientist, British or foreign, distinguished in any field of anthropological research in the widest sense.  Tim delivered the RAI's Huxley memorial lecture at the British Museum and that was followed by presentation of the medal and then a dinner at the Athenaeum Club.