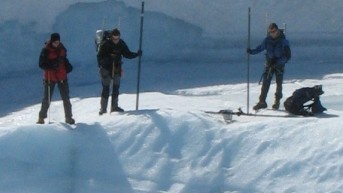 The first FAR NORTH (Fragility, Adaptation and Resilience to Rapid Climate Change in the North) meeting was held on Thursday 22 November 2012, 10am -12.30pm.

The FAR North start up meeting took place in room B20 of the Geography and Environment Department, in St Marys (Physical Geography Laboratory) to provide a series of 10 minute presentations on current FAR NORTH research, coupled with an introduction to the Post Doc research being undertaken by Dr Cristian Simonetti and the three PhD Studentships.

Participants in any of the other three North programmes were welcome to come along as the list of speakers was not exclusive.

Professor Alastair Dawson has been awarded part of a NERC Consortium grant, ’Arctic submarine slides and tsunami risk’  led by National Oceanography Centre, Southampton (October 2012 –September 2016) with a value of £43,000.

Professor Frithjof Kuepper currently holds a grant from the TOTAL Foundation (Paris), ‘Seaweed and oomycete diversity in the Canadian Marine Arctic’ that is supporting research in Baffin Island with a value of Euros € 50,000.00 (approximately £40,242.)

Professor Alastair Dawson is embarking on an exciting new research project on the risk to the UK coastlines posed by Arctic submarine landslides. The Aberdeen Coastal Institute is part of a large consortium, led by National Oceanography Centre, Southampton, who will consider this problem in a project starting in October 2012 and ending in 2015. One of the most destructive tsunamis that the teams will consider is that caused by one of the world’s largest submarine slides, the Storegga Slide that took place on the continental slope west of Norway around 8000 years ago. Submarine slides have important climatic significance also with many considered  to take place as a result of warming of ocean water that destabilises methane gas compounds in ocean floor sediment. Yet the timing of the Storegga submarine slide appears to have coincided with a period of exceptionally cold climate in Earth history.

Professor Alastair Dawson and the Aberdeen Institute for Coastal Research and Management (AICSM) have recently completed a research project ‘CoastAdapt’. The project is concerned with the adaptation of coastal communities in northern Europe to the effects of climate change. The project involves partners from Ireland, Scotland, Iceland (University of Reykjavik) and Norway (Hammerfest Commune). The research project took place over a three year period, 2009-2012 and was funded as part of the Northern periphery Programme of the European Union with an award to the University of ca. 80,000. Euros (approx GBP Sterling £64,426.).

Professor Frithjof Kuepper was an invited speaker at a recent conference presentation (10th Panhellenic Oceanography Symposium, Athens, May 2012) and gave a talk about the outcomes of our 2009 Baffin Island expedition.

Professor Alastair Dawson delivered a keynote lecture on, ‘Tsunami Geoscience’ at the International Association of Sedimentology in Schladming, Austria (October 2012).