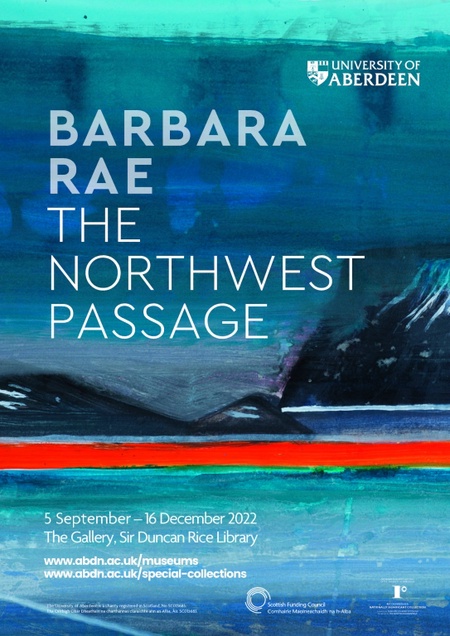 A new exhibition at the University of Aberdeen will bring together the work of one of Scotland's most acclaimed landscape artists and the story of an Orcadian explorer - united by both their name and passion for the Arctic.

Opening in the Sir Duncan Rice library on September 5 the exhibition will blend the work of Barbara Rae and artefacts from University collections which tell the story of John Rae (1813-1893), the first European to discover the fate of Franklin and his men while at the same time discovering the only navigable Northwest Passage.

Artist Barbara Rae followed in the footsteps of her namesake John Rae when making multiple journeys across the Arctic, creating a new body of work deeply connected to the region’s unique landscape.

Her paintings capture the critical condition of the arctic highlighting global warming which means that the once inaccessible Northwest Passage is now open a great deal of the year.

The exhibition will bring together Barbara Rae’s contemporary work with a retelling of the story of Orcadian John Rae, who trained as a surgeon and in 1833 signed on for a short term with the Hudson Bay Company in Canada. Captivated by the landscape and lifestyle, Rae stayed with the company until 1856, working on several major mapping and charting projects.

He spent his free time hunting and learning travel and survival skills from the First Nation and Metis people - including how to use sleds and snow-shoes - and these are credited with making him a proficient Arctic explorer.

But Rae’s place in the history books was tarnished by an 1854 report which he submitted to the Admiralty but which later appeared in full in The Times. The report detailed evidence that Rae had uncovered of the ill-fated voyage of Sir John Franklin which had set sail from Kent in May 1845 with 134 men aboard.

In it, Rae wrote: “...from the mutilated state of many of the corpses and the contents of the kettles, it is evident that our wretched countrymen had been driven to the last resource—cannibalism—as a means of prolonging existence” (Rae, 1854).

This led to outrage in Britain and Charles Dicken’s was among Rae’s strongest critics. His reputation never recovered and Rae was the only one of his contemporaries not to be knighted for his Arctic achievements.

Barbara Rae credits her own interest in the Arctic to John Rae after learning about the Northwest Passage in a school geography lesson and vowing that she would one day also undertake the journey.

While navigating the waters she sketched and took photographs, which, back in her cabin, she developed into small paintings. Returning to Edinburgh Barbara Rae translated these into large-scale paintings and monotypes, stripping the images to the bare essentials The landscape also drew Rae, a master colourist, to a palette of ice blues, indigo and shimmering greys.

Her work will be displayed alongside items connected to Arctic exploration, that help tell the often-overlooked story of John Rae, including intricate ivory carvings, snowshoes, and other tools. These are exhibited alongside 19th century books on Arctic exploration written by John Rae himself, and his contemporaries.

These will be showcased in the exhibition Barbara Rae: The Northwest Passage, running until December 16.

Curator Christina Mackenzie said: “During preparation for the exhibition ‘The Northwest Passage’, museum staff found many interesting items in the University of Aberdeen’s rare books and museum collections relating to Arctic exploration.

“It is great to be able to not only display these amazing artworks by Barbara Rae but to tell the mostly forgotten story of John Rae and his accomplishments. Seeing the paintings alongside items relating to such exploration is striking and really does make you think about how different the landscape is now to when he was traversing it 200 years ago.”

The Exhibition opens September 5 2022 at The Gallery, Sir Duncan Rice Library, University of Aberdeen. Opening hours daily 11am – 7pm. Entry is free and all are welcome.