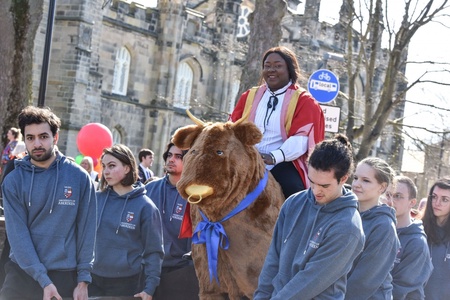 The new Rector of the University of Aberdeen was officially installed in the role in time-honoured tradition today (Friday, 25 March).

Martina Chukwuma-Ezike was installed as Rector in a ceremony at King’s College Chapel, before being carried through Old Aberdeen atop student mascot Angus the Bull.

The day began with a colourful academic procession representing civic, student and academic life in Aberdeen. University staff and students, along with representatives from the City and Aberdeenshire Councils, Incorporated Trades, alumni, and guests attended the ceremony in King’s College Chapel which included a performance from the University’s Chapel Choir.

After the ceremony Martina was carried by students along the High Street atop Angus the Bull, a decades-old tradition marking the installation of a new Rector.

She then took to the stage at  Elphinstone Lawn to address students attending the University’s ‘Live on the Lawn’ event, which is being held to celebrate the University’s diverse student population.

Martina was voted in by students following an election in November and began her three-year tenure on 1 January. A University graduate, she is Chief Executive of the Asthma and Allergy Foundation, Scotland’s only dedicated asthma charity, which she founded in 2009*

As a graduate of the University it is an honour to represent its students, and I look forward to working with AUSA and the student community to deliver on all the key issues raised in my manifesto" Martina Chukwuma-Ezike

Martina said: “As a graduate of the University it is an honour to represent its students, and I look forward to working with AUSA and the student community to deliver on all the key issues raised in my manifesto, including mental health support, student safety and welfare, and employability skills.

“I’d like to thank all those who worked alongside me and who voted for me in the Rector elections, as well as everyone who has worked tirelessly in making today’s ceremony a memorable experience for our students, staff, guests, myself and my family.”

Professor George Boyne, Principal and Vice-Chancellor of the University, said: “As a graduate, Martina has a long association with the University and with our students, many of whom have benefited from mentoring, volunteering and work placement opportunities through her leadership of the Asthma and Allergy Foundation.

“I am delighted that she has returned to the University as Rector, and on behalf of the academic community I am pleased to welcome her to this important role.”

Alisa Koester, AUSA Student President, added: “We are thrilled to finally have a Rector in place to support and represent our students. Electing Martina shows us that students need a Rector that actively engages with the life, issues and concerns on campus and beyond. We are looking forward to working with Martina on improving student wellbeing and mental health.”