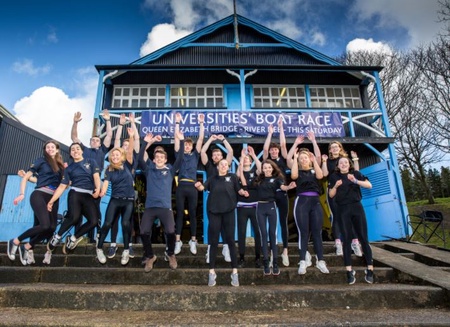 The crews for the 2022 Aberdeen Boat Race, which will see Aberdeen's two universities go head-to-head in the hotly anticipated competition, have been revealed.

Known as the north-east’s answer to the high-profile Oxford-Cambridge Boat Race, the student rowers (full profiles below) will battle it out on a 3.5km stretch of the River Dee on Saturday, April 2 at 3.30pm.

Made possible by the continuing support of both universities and the Aberdeen Rowing Community the cox for the University of Aberdeen will be Jamie Bailey and Jill Adam will lead Robert Gordon University’s team.

Preparation for the iconic event takes place year-round and demands a high level of commitment from those taking part. Supporters of both teams are this year being encouraged to come along to the banks of the River Dee and adopt a ‘Show your True Colours’ theme, with blue and yellow for the University of Aberdeen and purple and black for RGU.

It will be the 27th race since the event started in 1996—with 2020’s event being cancelled due to the Covid-19 pandemic and 2021’s event being held on a smaller scale.

Emily Carruthers, Aberdeen University Boat Club team president and a geography student from Edinburgh, said: “The rowers from both teams have been training harder than ever and it promises to be a thrilling day of racing with an electric atmosphere as everyone enjoys the return to taking part and spectating in style.

“There will be many events throughout the day including the second crews race and the alumni event, so I’d urge our supporters to come along and show your true colours. It is so exciting that the crews can look forward to support once again from the banks of the River Dee, it really does make all the difference. I’m sure it will be oar-some.”

Sarah Cameron, the Robert Gordon University Boat Club team president and Applied Social Sciences student who is also from Edinburgh, said: “Each of the 18 rowers perform more than 5,000 strokes to pull our boats across the 3.5km stretch. We really do give it everything we've got—and every bit of riverside encouragement is so appreciated.

It is so exciting that the crews can look forward to support once again from the banks of the River Dee, it really does make all the difference. I'm sure it will be oar-some." Emily Carruthers, Aberdeen University Boat Club team president

“I’m looking forward to seeing what we have in us and how that compares to our friends across the river, and I hope we find out between truly colourful banks and supportive cheers from start to photo finish.”

The race starts at the Bridge of Dee with the finishing point being at Aberdeen Boat Club with ample viewing opportunities from the riverbanks. Last year AUBC won the race for the 18th time and are the competition’s overall leaders, with RGU recording eight victories. However, since RGUBC’s first win in 2006, the teams have recorded eight wins each.

Professor George Boyne, Principal and Vice-Chancellor of the University of Aberdeen, said: “The Boat Race is a glorious event in the city of Aberdeen’s sporting calendar bringing together the communities of both universities with the north-east’s public.

“Both crews show the highest level of determination on the water, a culmination of many hours of intense training. It will be fantastic to witness the sporting rivalry and I offer both teams the best of luck.”

Professor Steve Olivier, Principal and Vice Chancellor of Robert Gordon University, added: “The opportunity to come together and celebrate the comradery, sportsmanship, and sporting excellence of both teams among the cheers of their supporters will be a spectacle to remember.

“I would encourage everyone—be it staff, student, alumni, family, or fan of rowing—to line the banks, show your true colours, and give every bit of encouragement to the crews of the Aberdeen Boat Race 2022.”