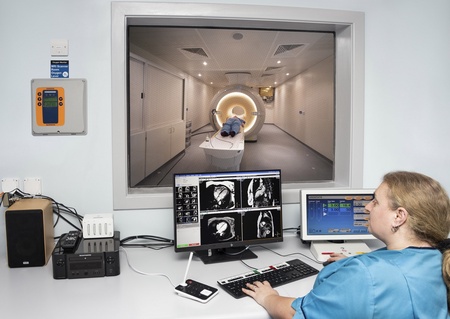 Some patients with an MRI appointment in Aberdeen will now be able to hear instructions in a familiar language, following a technology overhaul.

The University of Aberdeen’s MRI scanner, which has contributed to several key research discoveries over the years, recently had a major £1.2million upgrade.

In addition to the major benefits of clearer imaging, more accurate diagnosis and a 30% faster operating speed, the new software can also issue patient instructions in multiple languages.

The Phillips scanner, based within the Lilian Sutton Building, was pre-programmed with 17 languages including English, Spanish, French, Russian, Arabic and Mandarin but the software can also have additional languages added.

In collaboration with the University’s Elphinstone Institute, the scanner can now issue instructions in Scots, more specifically North-East Scots or Doric as it is known by many.

Dr Gordon Waiter, a senior lecturer and brain imaging expert at the University of Aberdeen said he hoped it might make some patients feel more comfortable in what can be a daunting environment.

He said: “The option to hear instructions in different languages is only a small part of this major overhaul which will bring massive benefits to both our imaging research capability and patients across the North of Scotland.

“But we’re aware that coming for an MRI scan can be unnerving, so anything that makes the experience more relaxing is welcome.

“As someone from the North-East myself I am proud of our distinct dialect of Scots and it’s great that advances in technology allow us to offer this degree of flexibility, whether it is for people who speak Doric, or indeed any of the other 17 languages available.”

Recent research by Dr Thomas McKean from the University’s Elphinstone Institute has explored how those with dementia experience second language attrition, eventually leaving them best able to communicate in their native tongue which in North-East Scotland is often Doric.

“People living with dementia find comfort in the familiar, the known,” says Dr McKean, “so hearing our mother tongue in a stressful medical situation can only be a benefit, helping to relax patients at a difficult time.”

The phrases, were recorded by Simon Gall, Public Engagement Officer with the Institute, who has seen this phenomenon first-hand.

He said: “My grandmother, a Doric speaker who has dementia, struggles now with communication in English, but when carers and medical professionals use Scots, she is much more responsive. Of course not everyone that comes for an MRI scan will be in this situation, but as well as helping those that are,

I’m learning through my own research on the use of North-East Scots in public health communications during the pandemic, that, for many, the language can reach people in ways that English does not, invoking, as it often does, notions of home, safety, and stability in very uncertain times. The uncertainty of receiving an MRI scan is perhaps a comparable experience on an individual level and the sound of Doric instructions may invoke positive feelings in those who hear them.

“It’s great that Dr Waiter decided to make use of the facility to allow us to record instructions in Doric and if my voice can put even one person at ease, I am delighted.”