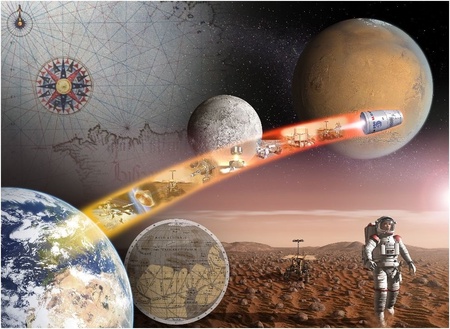 By Professor Javier Martin-Torres. Followed by an online Q&A session which was extremely well attended. Open to all.

International space exploration has exploded with some of the most significant and valuable objectives  around current, future scientific-technical and strategic (non-military) interest, to many different nations.

Space agencies around the world play an important role in this 'Golden Age' of space exploration that we now live in. Fourteen space agencies have launch capability and there are more than 70 diverse government space agencies.  For example, the European Space Agency consists of an amalgamation of national space organisations from numerous European countries.  All with different ways of operating and impacting on space research.

Professor Martin-Torres is based at the Department of Planetary Sciences at the University of Aberdeen, that focusses on the study of Earth, planetary sciences, the development of instruments for Earth, planetary exploration relating to MARS, the Moon, Remote Sensing, Astrobiology, Environmental Research and Hardware Development.

Recognised with five NASA Awards, Professor Martin-Torres was well placed to given an exclusive insider’s view on all the different space organisations that collectively have invested around 95 billion dollars in space research.

Fascinating details were revealed on the development of the space mission process under the many diverse conditions and challenges from different countries that all come together to collaborate and evolve into hugely important space enterprises.  In particular the role of the University of Aberdeen within space exploration was highlighted, along with the challenges of mounting international collaborative research in space and MARS, working with international collaborators, launch pads, mission controls and world space centers and agencies:

Professor Martin-Torres described his work with NASA/Langley Research Center and the Jet Propulsion Laboratory. His current involvement with NASA, ESA and other space agencies progressing current and future missions. Followed by a Q&A session open to all that asked about space/MARS research and if MARS could easily be seen from Earth! Of particular local interest, was the fact that Macaulayite has only been found at Bennachie in Aberdeenshire, Scotland by Jeff Wilson. NASA Scientists think that this is the same mineral that makes MARS look so red!

He is also Principal Investigator of HABIT (HabitAbility, Brine Irradiation and Temperature)/ExoMars 2020 instrument that aims to harvest water from the MARS atmosphere, leading to farms of water on MARS in the future!  It will be placed on the Kazachok lander on the forthcoming ExoMars journey to Mars in 2022.

Professor Martin-Torres is a theoretical physicist with interdisciplinary research interests.  He is leading Earth and planetary research using theoretical models, experimental data and developing space-borne instrumentation and laboratory facilities.  He is the also co-l of the NASA’s Curiosity rover, and the ESA’s Trace Gas Orbiter.  He is involved, along with many of the Department of Planetary Sciences Team at the University of Aberdeen, in several other important current and future space projects.

Find out more about the Department of Planetary Sciences located in the School of Geosciences at the University of Aberdeen: