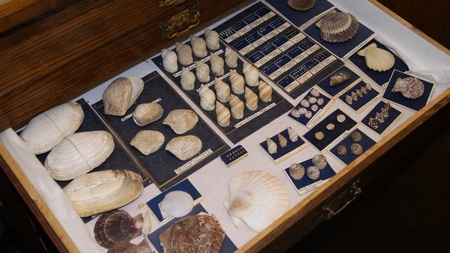 The University of Aberdeen has been awarded funding to improve accessibility, storage and interpretation of one of its most diverse collections.

The University is the recipient of the annual Natural Sciences Collections Association’s ‘Bill Pettit Memorial Award’ which supports the conservation, access, and use of natural science collections.

The £1,165 grant will be used in a year-long project to re-house and catalogue the Zoology Museum’s mollusc collection, reigniting its use for learning and research.

The project will also improve the storage of the molluscs to extend the longevity of the collection for future uses.

The University of Aberdeen’s Zoological Collection is a part of a Recognised Collection of National Significance, as well as being an Accredited Museum.

The Mollusc collection comprises approximately 2550 specimens collected from the 1840s up until the late 1970s. Although most of the specimens were found around the British Isles, the collection also includes several specimens from as far afield as the Pacific, Africa, China, Madagascar, America, and Canada.

As the scope of the collection is so diverse, with many of the specimens accompanied by detailed data, they act as an excellent historical record of specific species and their ecology.

The ‘Bill Pettit Memorial Award’ is allocated on an annual basis to support two collections-focused projects, which can include the conservation, access, and use of natural science collections. Project proposals are assessed and scored by the NatSCA committee and awarded to projects which are ‘delivered on time and budget, leaving a tangible legacy’.

The award was created in recognition of Charles Arthur William ‘Bill’ Pettit (1937-2009), for his dedication and commitment to natural sciences collections. Charles began his career at the National Institute of Oceanography but moved to the Manchester Museum in 1975 to become Assistant Keeper of Zoology, where he was instrumental in delivering many innovative projects throughout his time there.

University Museum staff will conduct an inventory, transcribing old data and labels into the museum database, re-organising specimens taxonomically, and cataloguing them using up-to-date nomenclature. Once updated, the specimen records will be fully accessible to the public and researchers via the university’s free online museum database.

It is also hoped that the research carried out during the project will lead to a better understanding of the donors and collectors, and the scope of their collecting, allowing the museum to tell their stories through new interpretation.

A new mollusc display will be created in the foyer of the Zoology building, which will include a papier mache model of a mussel by the 19th Century French naturalist Louis Auzoux. The display will celebrate the use of the natural history collections for teaching throughout the University’s rich history as part of this year’s ‘Zoology Museum 50’ event, celebrating 50 years of the museum.