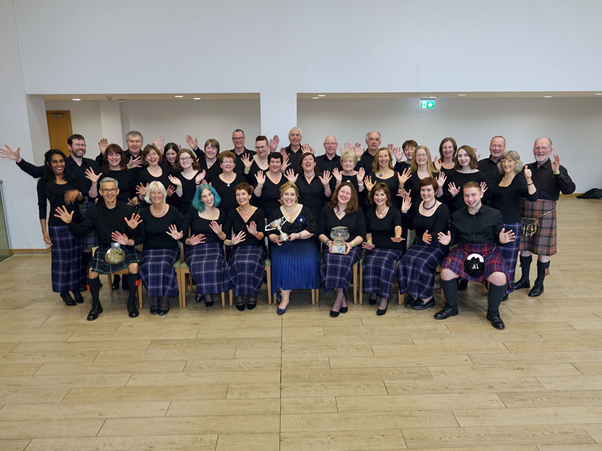 University staff triumph at Mod as part of Gaelic choir 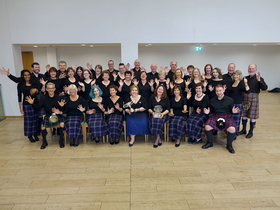 The Aberdeen Gaelic Choir following their success at the Royal National Mod.

Staff and students from the University were on song as part of an Aberdeen choir that claimed a top award at the Royal National Mod.

To add to their success, the group also scooped the John Macleod Carloway and Edinburgh Memorial Trophy for receiving the highest Gaelic mark (95/100).

Cheryl, a Lecturer in Management Studies, moved to Aberdeen a year ago and joined the choir to rekindle her involvement in music and singing, which she has been doing from a young age.

“I joined the choir about five months ago after a friend told me about it,” she said.  “It was a new experience for me as I don’t speak Gaelic, but I was keen to join because of my love for music.

We finished above 'big hitters' in the Gaelic choir world from places like Oban, Glasgow and Dingwall, which is a fantastic achievement for us east coasters given the different levels of Gaelic language proficiency in our choir." Malcolm Combe

“Taking part in the Mod was a wonderful experience, and to win the Puirt a Beul competition for the first time in almost 60 years is a tremendous achievement.

“We all did our best and practised hard, attending workshops as well as our weekly practice sessions, and I’m delighted that everyone’s hard work paid off.”

Malcolm, who sings bass in the Choir, added: "Naturally, I was delighted and indeed pleasantly surprised to be part of this winning team.

“We finished above ‘big hitters’ in the Gaelic choir world from places like Oban, Glasgow and Dingwall, which is a fantastic achievement for us east coasters given the different levels of Gaelic language proficiency in our choir.

“Our triumph is a great reflection of the efforts of all the choir members, but also the guidance of our Gaelic adviser Donna Dale and our conductor and immediate past conductor Kerrie Findlay and Alison Young respectively."