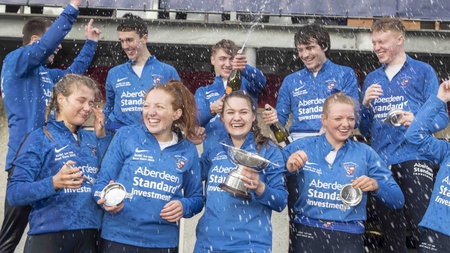 The University of Aberdeen crew turned the tide this year, following last year’s defeat, winning comfortably (over five lengths ahead) in a time of 7:53.6 minutes.

Their rivals, Robert Gordon University, finished the course in a time of 8:30.0 minutes. Aberdeen University also triumphed in the 2nd Crew Race and the Alumni Race, reclaiming the title with a clean sweep.

Hundreds of spectators lined the banks of the River Dee to cheer on the universities as the crews competed in the nail-biting race.

Anna-Sophie Tirre, 21, president of Aberdeen University Boat Club (AUBC), says: “We’re absolutely ecstatic to walk away with the trophy this year. I am very proud of everyone’s hard work and commitment. The crew’s determination was relentless and our perseverance has paid off.

“We were up against strong opponents – Robert Gordon University were really prepared for this race, but this is what made the challenge all the more exciting. I would like to thank Aberdeen Standard Investments for their continued support of the Aberdeen Boat Race.”

Erin Wyness, 22, president of Robert Gordon University Boat Club, says: “Congratulations to University of Aberdeen on their win today. Robert Gordon University has put in a lot of effort these last couple of months but were hard up against it with quite an inexperienced crew and some technical difficulties leading up to the race. Although we didn't execute the race how we wanted to this year, the student athletes gave their all. This is my fifth time as a part the Aberdeen Boat Race, this year coaching the crew rather than rowing in it myself, and unfortunately my last.

“It was a brilliant day from start to finish for all the athletes who raced and the spectators who lined the river bank to cheer on the crews. I’d like to thank Aberdeen Standard Investments for their backing for this event – we couldn't do this fantastic event year on year without their support and the help of the organising committee and volunteers who really make it happen on the day.”

STV competed against the BBC in a heated media race. STV claimed the title of the challenge in a time of 1:03.6 minutes, finishing the race by half a boat length ahead.