Boat Race Returns to the Dee this Weekend
21 March 2019 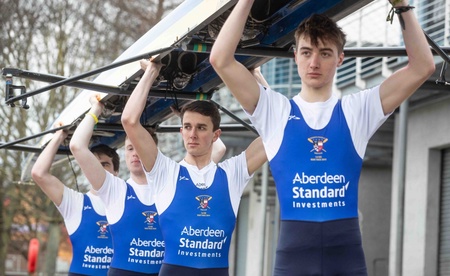 The annual contest between the University of Aberdeen and Robert Gordon University (RGU), the Aberdeen Standard Investments Boat Race, takes place on the River Dee on Saturday March 23.

Now in its 24th year, the Aberdeen Boat Race is a long-awaited sporting event in the north east, dubbed Scotland’s equivalent of the Oxford-Cambridge boat race.

The title race kicks-off at 3.20pm but the day will be jam-packed with races; the event begins at 1.20pm with the toss for stations, followed by the universities’ second crews race at 1.55pm, alumni race at 2.15pm and the media challenge race at 3pm, which will see teams from STV and the BBC battle it out on the water.

Spectators are encouraged to come and cheer on the competing teams as they face off against each other in the 3.5km contest, starting from the Bridge of Dee up to the Aberdeen Boat Club.

I hope that fellow students, family members and the general public will come together to show their support and admiration for the crews' dedication." Professor George Boyne

Professor John Harper, Principal of RGU, says: “The Aberdeen Standard Investments Boat Race is not only a major highlight in the north east, but it’s also a welcome recognition of the students’ hard work and commitment to the sport. The healthy rivalry that has now developed over the years has added to the spectacle and I'm sure I speak for many across the region when I express my anticipation for this weekend.”

Professor George Boyne, Principal and Vice-Chancellor of the University of Aberdeen, says: “The commitment of both of the universities’ crews is exemplary. No matter the weather, every year students from the two universities give this race their all. I hope that fellow students, family members and the general public will come together to show their support and admiration for the crews’ dedication.”