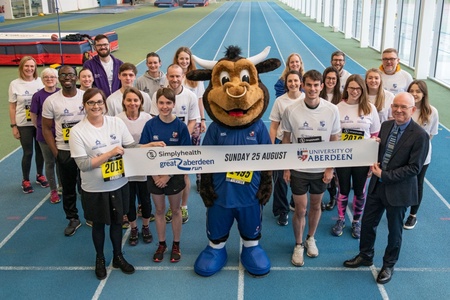 The University of Aberdeen is calling on staff, students and alumni to join its 'Gold Wave' of runners who will compete in this year's Great Aberdeen Run.

Commonwealth Games medallist Robbie Simpson and University mascot Angus the Bull were among those who marked the launch of the Gold Wave with a ‘sprint to the finish’ at Aberdeen Sports Village earlier today (Wednesday, March 6).

The initiative aims to encourage participation in exercise amongst the University community, while raising money for charity.

The Gold Wave will be among several waves of runners that will set off together at the start of the Great Aberdeen Run.  Aberdeen is the first Scottish University to be given its own wave by the organisers of the Great Run series.

Those who sign up can choose to raise money for the University’s Development Trust to support widening access scholarships, or Aberdeen University Student Association’s (AUSA) Raising and Giving (RAG) charity fundraising group, which in recent years has supported local charities such as CLAN Cancer Support and Mental Health Aberdeen.

Participants can choose to run the 10k or half marathon, and if they raise £50 or more for the Development Trust or AUSA their entry fee will be waived.

Staff and students at the University’s Qatar campus will also get involved by taking to the treadmill on August 25th and competing alongside their colleagues in Aberdeen to complete the route, which passes through the Old Aberdeen campus. Participants in Qatar will be raising money for Reach Out to Asia (ROTA), which supports education in crisis-affected areas across Asia and around the world.

A Gold Wave training group, available to join on the Strava activity tracker app, has set a collective training target of 4,647.5m (7,480km) - the distance between Aberdeen and Doha.

And in a nod to the University’s origins, race number 1495 – the year that King’s College was founded – will be worn by sports bursar and long-distance runner Grace Whelan.

University of Aberdeen Principal, Professor George Boyne, was among those at today’s launch.

The Gold Wave is a great way for everyone involved with the University to work together towards a big local running event and raise support for worthy causes in the process." Robbie Simoson, Commonwealth Games medallist

He said: “I’m delighted to be here to help mark the launch of the University’s Gold Wave which will see our close-knit community – students, staff and alumni – unite as one to cross the start line together at the Great Aberdeen Run.

“I’m especially pleased that students and staff at our Qatar campus will be getting involved to run the route alongside their friends and colleagues here in the city.

“As a University we are committed to promoting exercise and well-being among our students and staff, and to supporting good causes in the local community.

“No matter your fitness level, or whether you are a beginner or a seasoned runner, there is a place for you in the Gold Wave.  I’d encourage anyone from the University to sign up and help raise money for some great causes.”

Robbie Simpson said: “The Gold Wave is a great way for everyone involved with the university to work together towards a big local running event and raise support for worthy causes in the process.

“Whether you’re a complete beginner or experienced runner it adds more fun and an extra incentive to an already brilliant event.”

David Hart, from The Great Run Company, added: “The University of Aberdeen team will be an excellent addition to the Simplyhealth Great Aberdeen Run.

“The benefits of exercise in helping physical and mental well-being are well documented and we particularly look forward to welcoming those who may not have taken part before to the start line in August!”

Staff, students and alumni can sign up to the Gold Wave at www.abdn.ac.uk/goldwave.