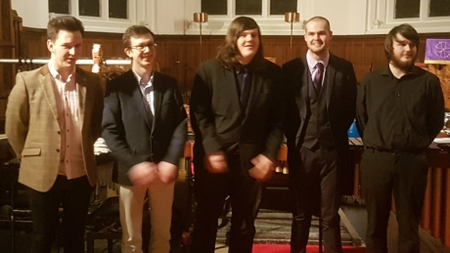 Professor Pete Stollery presented the award to the winner, in the King's College chapel and all the other finalists (right to left), Brodie McCash, Geordie Cryle, James Aburn and Matthew Clark, were commended.

The fourth Carlaw/Ogston Composition Music Prize final was held on 15 March 2018, in the King's College Chapel where five young composers from the Music Department had their compositions performed to a large and enthusiastic audience

The pieces were performed by Spectrum New Music Group members under the direction of Kathleen Cronie and were adjudicated by Professor Pete stollery who gave the award to Scott Bathgate (Pictured centre).

The other finalists (listed below) were all commended by Professor Stollery in his summing up as he explained how his task had been difficult in choosing just the one winner.

Scott was delighted to receive the award and congratulated all the other finalists on their compositions.

Margaret Carlaw and Derek Ogston were on hand to present the award to Scott which includes a commission for a larger work to be performed later in the next concert series.