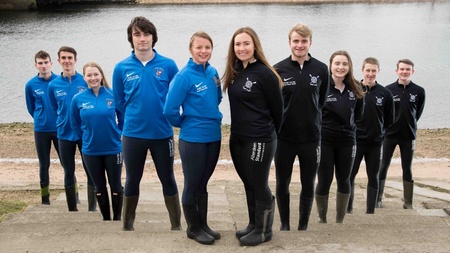 The River Dee will come alive this weekend, as student rowers battle it out on the water on Saturday, March 17 to claim glory at the 23rd annual Aberdeen Boat Race.

The highly-anticipated sporting event – which is sponsored by Aberdeen Standard Investments – will see challengers Robert Gordon University take on reigning champions the University of Aberdeen in a race which has been dubbed Scotland’s equivalent of the Oxford-Cambridge boat race.

Spectators are encouraged to line the riverbanks to cheer on the crews as they tackle the gruelling 3.5km course, which runs from the Bridge of Dee to Aberdeen Boat Club.

Ahead of the title race at 1.30pm, a full day of racing awaits spectators – beginning at 11.20am with the toss for stations, during which the students will decide which side of the river they will row on. This will be followed by the universities’ second crews race at 12.05pm, the alumni race at 12.25pm, and the media challenge at 13.10pm, which will see STV and the Press & Journal face off against each other.

I hope that this year's race is a thrilling one, both for the rowers and the spectators." Professor Sir Ian Diamond

Martin Gilbert, co-chief executive of title sponsors Aberdeen Standard Investments, says, “Every year, I am in awe of the dedication that the university crews display in the lead up to the Aberdeen Boat Race. Preparing for any event alongside your studies can be stressful, but the way the students manage their time to get ready for such an important sporting event is commendable. This is an important life skill that they will be able to take into the working world after graduation. The pressure is on for both crews to bring the trophy back to their respective boat houses – and I for one am looking forward to a photo finish. May the best crew win.”

In the lead up to the Aberdeen Boat Race, the rowers from both crews briefly set aside their differences to record a video parodying one of Billy Ocean’s classic songs. ‘When The Water Gets Rough, The Tough Get Rowing’ has been viewed thousands of times online, and provides a taste of the fun atmosphere on the riverbank on race day.

Professor Ferdinand von Prondzynski, Principal of Robert Gordon University, says, “The crews have been training hard over the last few months, both on the water and on land, and it looks like this year’s race is going to be as exciting as ever. Of course I’ll be cheering on Robert Gordon University from the riverbank this weekend – but I hope that, whomever they support, many people from the city and beyond will join me for a day of exciting sporting action on the River Dee.”

Professor Sir Ian Diamond, Principal and Vice-Chancellor of the University of Aberdeen, says: “The Aberdeen Boat Race is the culmination of a year’s hard work for both crews. They represent some of the very best of our student athletes, and the ever-closer competition is a testament to their drive and determination. I hope that this year’s race is a thrilling one, both for the rowers and the spectators.”