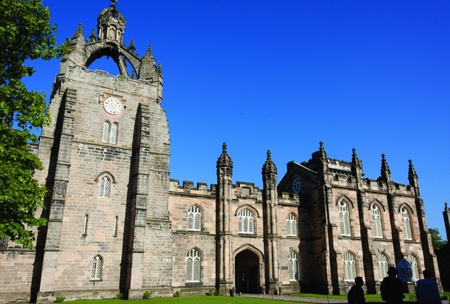 A new study being carried out by the Universities of Aberdeen, Stirling and Edinburgh is aiming to identify and analyse sounds associated with particular places in a bid to gain an insight into the impact of an environment on mood and memory.

People associate places – such as their home or workplace – with particular sounds, however, it is difficult for academics to investigate the link between the two due to the complexity of sound.

Existing strategies to explore sounds typically involve listening to long recordings, gathering information subjectively or using frequency analysis. However, computer scientists at Stirling, in partnership with academics from Aberdeen and Edinburgh Universities, have now developed a tool that uses feedback from large groups of people to identify sounds commonly associated with particular places.

Four sites across Stirling and Aberdeen – comprising each campus and both city centres – are the focus of the project. The sounds will be analysed to discover how they develop over time, sound collections reflecting each place will be produced and participants – who will hear sounds for the sites via a web page a few times over a three-month period – will have their mood tracked.

The team believe their work around mood and memory could provide a valuable insight into supporting groups of people, such as those living with dementia.

Dr Suk-Jun Kim from the University of Aberdeen and SERG, the university’s sound and electroacoustic music research group (http://www.serg-aberdeen.net/) said: “The key aim for the project was to examine the apparent link between people’s memory of or familiarity with a place and sound through a methodology that has not been widely used in sound studies or sonic arts. This link is “apparent” mainly because such an examination of the connection between place and sound has often been explored by sound artists or scholars of sound studies who have approached the link in a more artistic, intuitive or conceptual level. In this project, however, we wanted to incorporate a different method—an evolutionary algorithm to sift through a vast amount of sounds with the help of participants.

“My PhD student and I, Jamie Lawson, collected sounds from the city centre and the university both in Aberdeen and Stirling. We then cut these sounds into 3-second long samples so that there may be just enough sonic information for participants to recognise a place in them. These sound samples were then used by a web app developed by Dr Brownlee’s team at Stirling. We now need as many participants as possible who are familiar with either of the cities to participate in this project, as the evolutionary algorithm requires a large amount of data for it to work best.

The key aim for the project was to examine the apparent link between people's memory of or familiarity with a place and sound through a methodology that has not been widely used in sound studies or sonic arts." Dr Suk-Jun Kim

“This is a pilot project, meaning that not only are we interested in the results of this specific question about the link between place and sound, but we are also hoping to find out the feasibility and practicality of the methodology we devised in sound studies. If successful, we hope to use this methodology for asking bigger issues such as mental health and sound.”

Dr Alexander Brownlee, a Computing Science Research Fellow at Stirling, commented: “Sound, memory and emotion are tightly interwoven, and often a person will associate a place with particular sounds.

“Artists have tried to identify the identity of place through sound, but this is challenging because the sounds are too complex, and elicited sounds are inevitably biased by preconceptions of the artist.

“We are interested in exploring the relationships between sound and places for groups of people, so we’ve developed a tool that will use the feedback from many people to find sounds that are commonly associated with particular places.”

The team has already collected more than 16,000 sounds from the four areas and hope the next stage, involving public participation, will produce interesting results. Volunteers are asked to sign up here , listen to sounds and provide feedback

The project is funded by a grant from Scottish Crucible / Royal Society of Edinburgh.