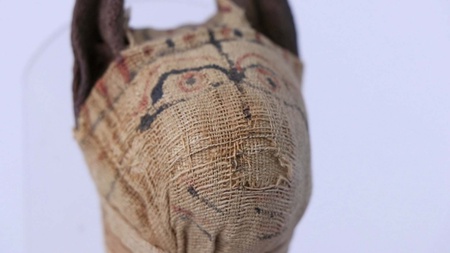 A mummified, ancient, Egyptian cat is among a host of artefacts from the University of Aberdeen museums' collections that have been captured using 3D imaging software so they can be shared around the world.

Photogrammetry involves taking hundreds of photos of an object at slightly different angles and ‘stitching’ them together to create an interactive digital 3D model.

The process is already being used by the University of Aberdeen’s anatomy department to create digital models of organs and other body parts to aid teaching and learning for young doctors.

Now the same technology is being used to create virtual replicas of artefacts within the University’s museum’s collections, including an ancient Egyptian mummified cat, prehistoric skulls and ancient Greek pottery.

These artefacts are rarely handled as they are so fragile. Photogrammetry lets the public and students get to see them close-up and in very high detail.

One of the most interesting items to be record so far is an ancient Egyptian mummified cat.

The reasons for digitising these artefacts are twofold - on one hand we're thinking about the students in Aberdeen and the chance for them to fully take advantage of our wonderful museum collections." Neil Curtis

Cats were mummified for various reasons; household pets were buried with their owners but many were created as sacred offerings to the gods, such as the goddess Bastet who was portrayed in the form of a cat.

An entire industry existed which is thought to have produced more than 70 million animal mummies, so it is not entirely surprising that some were not quite what they seemed.

In addition to the 3D model, the Aberdeen team put the cat mummy through a CAT scanner (no pun intended!) to reveal what was inside. By blending the digital model of the mummified cat with the internal CAT scan, the team were able to create an ‘outside and in’ animation of the entire artefact.

The scan revealed a kitten skeleton far smaller than the bandages it was encased in.

“You’d make more money selling a big mummified cat, compared to a small one, so they basically bulked it out with bandages to make it look bigger,” explains Neil Curtis, Head of Museums at the University of Aberdeen. “It looks like the cat’s neck had been broken, so it’s quite a gruesome tale really, but it gives some insight into what daily culture and customs existed around these temples in Egypt at that time.

“The reasons for digitising these artefacts are twofold - on one hand we’re thinking about the students in Aberdeen and the chance for them to fully take advantage of our wonderful museum collections. It’s a tremendous privilege to be a student in Aberdeen when you have access to these collections, so we are always looking for ways to make more use of it and make it as accessible as possible.

“In addition we are able to make these models available online so anyone in the world can access them. Aside from the general public, there are a number of international projects looking at areas such as mummified cats, so by making these available we are contributing to international scholarship as well as our own teaching.”

The photogrammetry project is supported by the Roland Sutton Academic Trust and an NERC Capital Equipment grant.