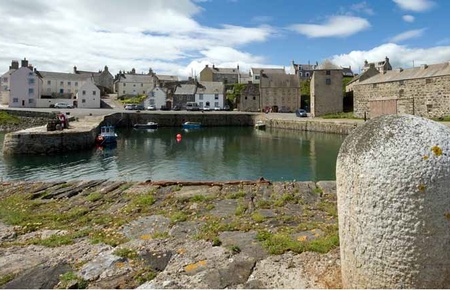 Mr Ross Wilson's talk will be on the inspiring regeneration project that brought back life to historic derelict Portsoy buildings. He will also give a short preview of the newly launched Union Street, Aberdeen city regeneration project. All welcome.

Mr Wilson was recently appointed Conservation and Listed Buildings Officer at Aberdeen City Council, following posts at Historic Scotland and the Heritage Lottery Fund and he was also the Conservation Officer for the Portsoy area.

His interesting talk will be on the picturesque town of Portsoy on the Banffshire coast, and the inspiring regeneration project that recently ended after successfully bringing back to life historic buildings which were either derelict, or in need of restoration.

Mr Wilson will focus on this visionary project undertaken over the last 5 years through a Conservation Area Regeneration Scheme (a real success story) that not only restored an important part of Portsoy’s heritage, but also fostered environmental, social and economic regeneration, building on the famous Portsoy Boat Festival, and the promotion of traditional skills. He will also give a short preview of a similar project that was launched by Aberdeen City Council, to start the regeneration of Union Street in Aberdeen city.

Hosted by the Old Aberdeen Heritage Society. Refreshments will be served after the talk.