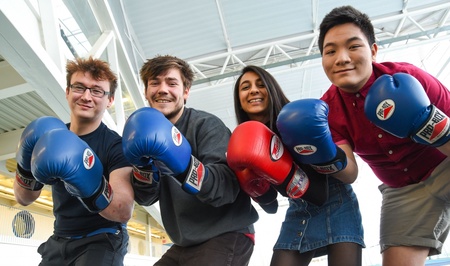 A new initiative to encourage LGBT people to get involved in boxing has been launched in Aberdeen.

In a first for north-east Scotland, The University of Aberdeen Boxing Club is working in partnership with Boxing Scotland and LEAP Sports to offer classes for LGBT people that aim to challenge perceived barriers to participation in the sport.

The first class, which is also open to non-students, is due to take place on Tuesday (March 7) at Aberdeen Sports Village.

Ed Eadie, Captain of Aberdeen University Boxing Club, said the initiative came about as a result of conversations with LGBT people who were keen to take part in boxing, but reluctant to join a club.

“We love boxing and want to encourage everyone to join our club, but it became clear to us that many from the LGBT community have reservations because they see boxing as a macho sport,” he explained.

“We want to show people that boxing is a great sport that is open to everyone regardless of sex, gender or sexuality, and this class is intended to get that message across while offering a gateway to participation in our main club.

“We know there is definitely an interest from the LGBT community, and we hope that this class can break down negative perceptions that have acted as a barrier to participation.”

Stephen Wall, who is studying towards a Masters degree in Genetics at the University of Aberdeen, is among those planning to go along to the new class.

“I’ve always had an interest in boxing so when I heard about this class I was immediately interested,” he said.

We want to show people that boxing is a great sport that is open to everyone regardless of sex, gender or sexuality" Ed Eadie, Aberdeen University Boxing Club Captain

“I didn’t know what to expect when I met with people from the club, but they were really nice and keen to emphasise that the class is as much about having fun as improving your fitness.

“Their enthusiasm will definitely help encourage people from the LGBT community who might have thought twice about taking up boxing.”

The initiative is being run with the help of LEAP Sports, an LGBT organisation, who have agreed to fund the class so that it can be offered for participants for free.

“Boxing is associated with macho stereotypes where success is viewed in levels of expressed masculinity, which is a huge barrier for LGBTI people taking part.

“We have been happy to support boxing initiatives where this is understood, and where efforts are being made specifically to attract LGBTI people to take part.  We've previously worked with Boxing Scotland on other initiatives and were delighted to support this particular initiative.”

“Because this is the first time there has been an LGBT boxing class in the north-east it’s hard to predict what the numbers might be, but we are hopeful of a good turnout.

“Our hope is that the class will encourage people who otherwise might not have tried boxing to give it a go and give them a pathway into the sport.”