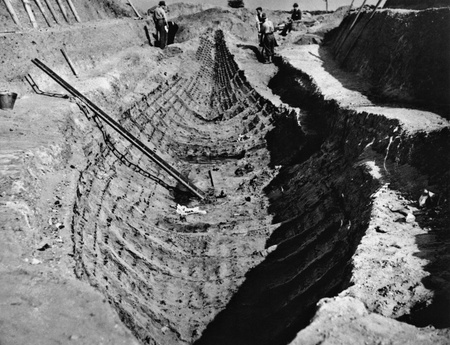 Scientists have discovered a new material to add to the collection of treasures from the Sutton Hoo ship burial - bitumen from the Middle East.

The 7th century burial site in East Anglia is the most richly furnished grave ever discovered in Britain.

Fragments of black organic material found at the burial were previously thought to be tar, linked to maintenance of the ship.  However, a fresh analysis has confirmed that the material is bitumen, a highly prized and valuable product in ancient times that was used in a variety of ways, from embalming to waterproofing.

While it is unclear what the material was used for, archaeological finds of bitumen from ancient Britain are extremely rare and this is the first example to be linked to Middle Eastern sources.  It means that another exotic item can now be counted among the Sutton Hoo treasures.

The discovery highlights a successful collaboration between scientists at the University and the British Museum, the results of which have been published in the open access journal PLOS ONE.

Experts from the British Museum analysed archaeological residues, while geoscientists from the University applied their knowledge of fossil fuel characterisation to identify the source of the material.

Dr Stephen Bowden, from the University of Aberdeen’s School of Geosciences, said: “There are quite a few local sources of bitumen in the UK but the chemical fossils within show that this material comes from the Dead Sea family of bitumens, perhaps sourced in Syria.  It shows that even a thousand years ago petrochemical products were being traded internationally.”

Dr Rebecca Stacey, who led the work at the British Museum, said: “We don’t know whether the pieces are fragments of small bitumen objects or part of a larger composite object combining other materials that did not survive.

“Either way, it rewrites our understanding of the finds and shows that more than 75 years after its first discovery there is still much to be learnt about this remarkable burial assemblage.”

Dr Pauline Burger, who analysed the material during her EU-funded Marie Curie Fellowship at the British Museum, said: “The result was completely unexpected. We were intending to study tar, but to find some undiscovered imported grave goods instead was tremendously exciting.

“Whether acquired by gift or trade, the find demonstrates the far-reaching network of the East Anglian elite at this time and raises intriguing questions about the use and value of bitumen in early medieval Northern Europe.”