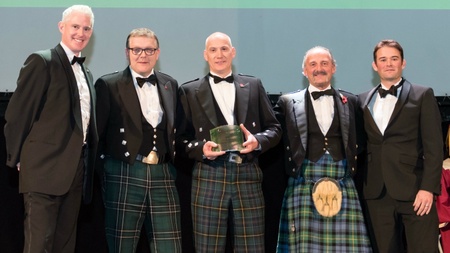 The University of Aberdeen's Rocking Horse Nursery has won a prestigious national award in honour of its energy efficient design.

The University won the Large Institution Award in the Built Environment category of the Green Gown Awards, which recognise exceptional sustainability initiatives by universities and colleges across the UK.

Completed in August last year, the building is the first nursery in Scotland and the first building at a Scottish university to be awarded Passivhaus (Passive House) certification in recognition of its energy-efficient design concept.

The design uses very little energy for heating or cooling, and combines indoor space with external play areas that encourage the children to interact with nature and spend time outdoors.

While common in Europe, Passivhaus buildings are rare in the UK.  The project was seen as a way to provide a comfortable environment for the youngest members of the University community for years to come, while demonstrating the University’s commitment to sustainability.

Project Sponsor and Director of Student Life, Leith Forsyth, welcomed the judges’ focus on the stakeholder and public engagement credentials of the project, which was a crucial factor in the Aberdeen team’s win.

The Green Gown Award adds to a growing collection of awards that the University has received in recognition of the nursery's innovative design, and I'd like to congratulate the project team on yet another success" University of Aberdeen Principal, Professor Sir Ian Diamond

He said: “Since it opened, the Rocking Horse Nursery has become a talking point in the region and has attracted visits from local authority teams, architects, planners, and nursery staff from across Scotland and beyond.

“Not only this, but we have showcased the nursery’s design through public engagement events and case studies, which help illustrate the unique challenges of this demanding project.

“In addition, as part of this year’s May Festival Professor Wolfgang Feist, the founder of the Passivhaus concept, gave a keynote address and presented the building’s Passive House accreditation as part of Scotland’s Year of Innovation, Architecture and Design.”

He said: “A key factor behind the University’s success was our willingness to share knowledge about this completely new design concept, for which our team was commended by the judges.

“The Green Gown Award adds to a growing collection of awards that the University has received in recognition of the nursery’s innovative design, and I’d like to congratulate the project team on yet another success.”