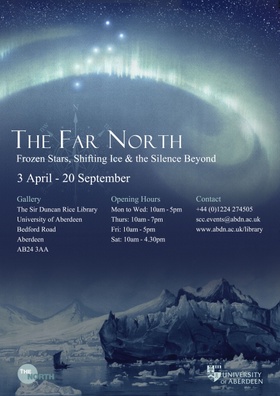 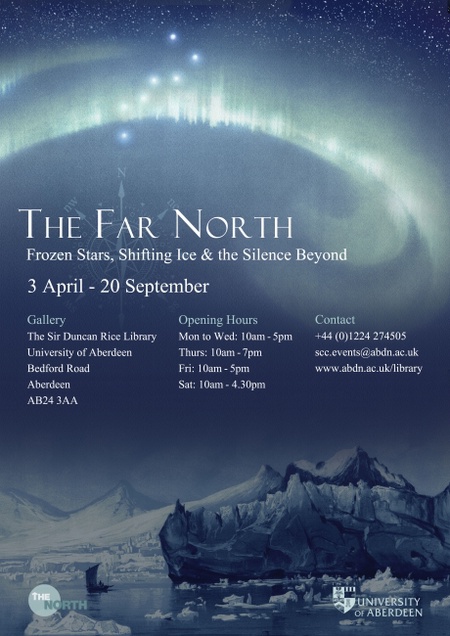 In collaboration with the Special Collections Centre at Aberdeen. Co-curated by  Professor Peter Davidson and Sophie Dietrich, who is researching for a PhD in History of Art as member of the Northern Temperament research group.

The Concept of the Exhibition

The Far North – Frozen Stars, Shifting Ice and the Silence Beyond explores the manifestation of the Idea of The Far North in contemporary art, historical artefacts and written words and, is divided into four sections. Exhibition visitors will follow in the footsteps of European Arctic explorers of the 19th century.

Today, we associate the Arctic with subjects like global warming, environmental changes, soon-to-be-ice-free shipping routes and the ownership of land, sea and natural resources.  In popular consciousness, however, the Arctic lives as a large number of impressions collected in images and stories.

We thus seek to encourage the visitor to face their own Idea of the Far North at the end of their journey, and believe that understanding is fostered by knowledge of the earlier history.

In addition, we judge that the understanding of cultural concepts lying behind aesthetic choices or written words, can contribute to scientific discourse on an interdisciplinary level.

If you should have further questions, then please email Sophie Dietrich.

This free exhibition is open to the public - All welcome!