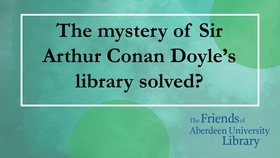 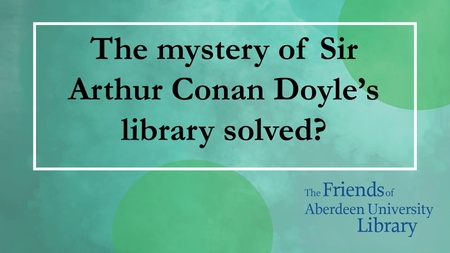 Evening lecture organised by the Friends of Aberdeen University library.

Join Dr William Zachs as he discusses the mystery of Sir Arthur Conan Doyle's library in this evening lecture.

The recent recovery of a substantial part of the private library of the creator of Sherlock Holmes presents an opportunity to understand Sir Arthur Conan Doyle and his world in new and unexpected ways. The collection includes special annotated copies of his own books - not least the very first Sherlock Holmes story, A Study in Scarlet (1887). Among the volumes are source books for the detective stories which have endlessly captured the imagination of the world. No less central to this collection are over one hundred presentation copies from such authors as H. G. Wells, J. M. Barrie and others which reveal Conan Doyle’s extensive literary, political, medical and social networks. The annotated copies of the writings or other Scottish authors - Sir Walter Scott and Robert Louis Stevenson in particular - further uncover dimensions of Conan Doyle’s literary influences and networks.

Organised by the Friends of Aberdeen University Library.

Hosted by: University of Aberdeen Museums and Special Collections