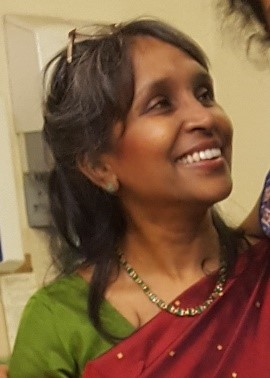 ‘There is more that unites us than that separates us’. This is a quote from the film ’Black Panther’. Amudha Poobalan, Senior lecturer in Public Health reflects on what unites us at the University of Aberdeen: COMMITMENT.

I was born and brought up in south India and was very privileged to attend one of the most reputable medical schools in India, CMC (Christian Medical College) in Vellore. After graduating I worked as a chief medical officer and managed a small hospital for 4 years. That was my identity…then my identity changed! I became a wife and followed my husband to the UK…my transitions began.

Physical transition: When I was preparing to come to UK, my husband said that the UK is extremely cold. In my head, extremely cold is 20 degrees because where I lived all my life, I only know 35 degrees! Twenty-five years ago, in India, I had never seen a supermarket before or an ATM. Here I was in the UK with my head buzzing. I could understand the news on the BBC …but didn’t have a clue when people spoke to me in Aberdeen! The dialect was so different.

Education transition: I took a good few months to settle in, made friends, and then I thought I would study in Aberdeen and joined a Masters degree. Many of our students don’t have the luxury of settling in, they hit the ground running. My assumption was that I had previously studied in one of the best medical schools, I had worked for 4 years and had all that clinical Public Health experience, so I thought I was going to waltz in and out of that Masters degree, but I didn’t. When I did badly in my first assessment, I was demoralised and angry with myself ... What am I doing wrong? I asked myself. I always did so well. Why not here? I went to see my professor to tell him that I was not coping, and I was going to give up. He sat me down and said, ‘you are doing badly not because you are not capable but because you are studying in a different education system’. He suggested that I read more widely and develop my critical thinking. In India, rote learning was all I knew. My previous learning was that you attend lectures, you listen carefully to your lecturers, you summarise your notes, consolidate your learning, reproduce it and you will get a really good mark. In Aberdeen that didn’t work, and I didn’t know why. ‘Think critically’ didn’t mean anything to me at that point. ‘Read more widely’ meant reading books from cover to cover.

Emotional journey: Then there is this emotional journey. When I did badly, I felt demoralised, I felt lonely. I had my husband who I could vent to, but for many of our students they feel lonely, and are not able to say that they are struggling. They don’t want to let their parents/family know so as not to worry them. They have invested quite a lot to come here and initial struggles cause distress.

Amudha Poobalan is the programme lead for the Masters of Public Health (MPH) in the School of Medicine, Medical Sciences and Nutrition. Having studied both in India and the UK, she has experience of the physical, cultural and educational transitions that students make, and the support that is needed for better engagement and learning.