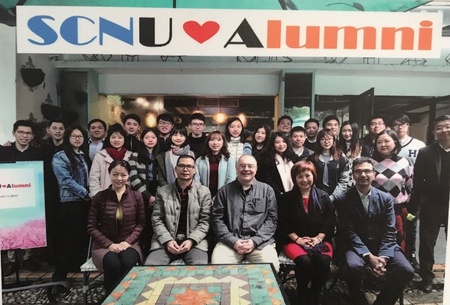 Mark Whittington and colleagues at the University of Aberdeen Business School (UoABS) have been developing partnership programmes with South China Normal University (SCNU) for over a decade. This is a story of one success feature of working together – academic buddying. This addresses how can we cross cultural divides and educational understandings through co-operation.

Whilst the primary aims of recruiting international students are to enhanced the international experience of all students and to develop an alternative income stream, we need to be aware of the benefits for academics both in terms of broadening our experiences and our understanding.

Background to the Partnership

We started running a typical 2+2 undergraduate degree with SCNU following visits in 2007. Good student results and positive staff relationships led to us seizing opportunities to be creative. A proposal for a four-year degree in Finance and Real Estate with a joint degree from both institutions was thought through. We had to consider student demand, the regulations of both universities, visa and other governmental initiatives as well as the development of a common teaching and learning style over time. The students would move from China to Scotland after the end of year 2, but 33% of the content in years 1 and 2 were to be taught as ‘Aberdeen modules’ in SCNU. This was to better prepare the students for the teaching shift that would accompany the geographic one when they moved from China to Scotland.

Buddies – an idea that developed

SCNU were keen that development of their staff was a core gain from the initiative. Academics from Aberdeen were concerned about being perceived as more ‘expert’ than the SCNU team members. An initial idea of ‘shadowing’ became ‘buddying’ with each course consisting of a team of an Aberdeen lecturer and an SCNU lecturer. The Aberdeen staff member adapted the appropriate Aberdeen module, usually spread over a term, to a more time-focused module with one week of core teaching when the Aberdeen lecturer would be at SCNU. This was done through liaising with the buddy who would make sure that the learning day structure was understood (8:30am start, every session 45 minutes but a two-hour lunchbreak!). Then, together, the two lecturers would devise a hybrid learning experience to introduce elements of Scottish learning approaches within the structure of a Chinese university day.

I was the Aberdeen staff member for the first UoABS module at SCNU – feeling that I needed to shoulder any blame or save anyone else from any aspects that didn’t work. Without the buddy, I reflected the course would have been a disaster and I would have missed a great experience. Through video calls and emails, the two of us planned the module together. The buddy suggested taking all the 8:30am sessions as I would be stuck in traffic coming from the local town. We devised a day with alternate lectures and exercises/cases to break up the long days and to end each day with an exercise to be reviewed first thing the following morning. Assessment needed to meet the expectations and rules of both universities and this was something neither of us could have done without the other.

The role of the buddy in delivery of the module became even more important than first expected. It was planned that the UoABS lecturer would deliver most of the content, but it became apparent that as English language training was part of the course design the students needed some extra support. So, the buddy helped by:

As the week went on the students became more relaxed talking with me directly and those who were happy to converse in English gained confidence. There started to be more jokes as we understood what would work across the cultural divide and learning accounting became the fun it should always be. Assessment results were good and the excitement of preparing for Aberdeen was raised as well as a sense that the experience would not be as ‘foreign’ to the students as they had feared.

I made friends, was able to reflect on my practice as an educator and understood my ‘cultural priors’ in a new way – things I had taken for granted, but that really needed questioning – when teaching students in Scotland never mind Guangzhou! Over more than a decade this partnership has thrived as many of the key team, in both institutions, have stayed in place. Mutual understanding and respect has grown, and, as ever, getting to know individuals with different backgrounds breaks down any unintentional tendency to categorise and ‘other’ people – realising that their experience is at least as valid as mine and can throw new light on what I thought I knew about myself.

Mark is a qualified accountant and became an academic almost thirty years ago. He has researched broadly across accountancy and finance including real earnings management, pensions, international accounting, cloud security as well as accounting education. He is a past Head of School at UoABS.