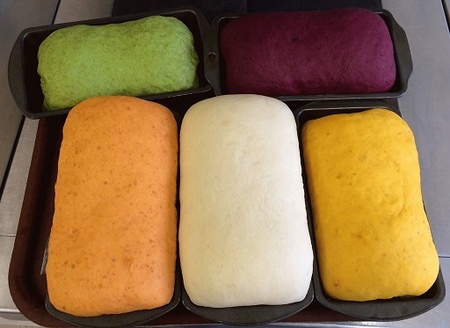 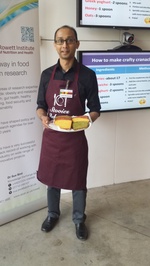 Rowett scientists had a fantastic two days at the Edinburgh International Science Festival this week, the event demonstrated the potential of reformulating foods for health. Visitors to the Real Life Science studio at the Royal Botanic Gardens had the opportunity to taste bread made with vegetable powders from beetroot, carrots and spinach.

The resulting ‘disco’ breads were a real hit with many of the families who attended the event.  Dr Viren Ranawana, who presented the workshop alongside Prof Garry Duthie, said: “Each loaf contained dried vegetable powder which is equivalent to between 300-500g of fresh vegetables, so two medium slices (80g) provide between 30-50g of vegetables and that is equivalent to one portion of your five-a-day.”

Visitors also had the opportunity to make ‘crafty cranachan’ which used low fat (or no-fat) dairy products in place of the traditional ingredients, and proved to be a popular dessert.

Everybody went away with a copy ‘Stovies Reloaded’, a light-hearted take on traditional Scottish recipes and how they can be adapted in the light of increased nutritional knowledge.