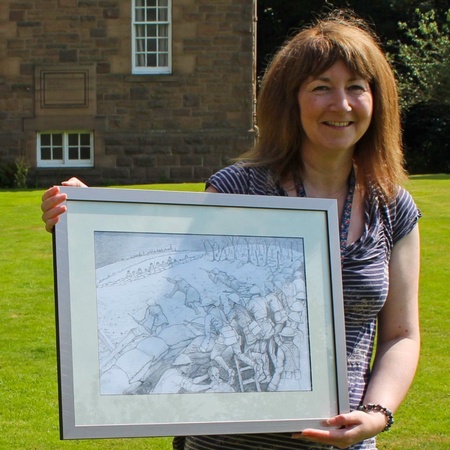 Pat Bain from the Rowett Institute of Nutrition and Health has come up with a picturesque way to raise funds for the Poppy Appeal.

Pat, who is a member of the Garioch Art Group, sketched her piece, Lest we Forget, as tribute to those who served in the Great War.

The artist, whose grandfather served as a Gordon Highlander, then decided to hold a silent auction for the drawing, with the proceeds going to the Poppy Appeal.

Bidders can also make their bid directly to Pat by calling 01224 438670.  The picture can be viewed online http://www.patbain.plus.com/

I am delighted to have been able to organise this and hope to raise as much as possible for such a worthy cause." Pat Bain

Pat commented: “As we can no longer thank these veterans for their bravery, as a mark of respect the least I could do was draw this picture and donate the proceeds to the Poppy Appeal.

“It’s not representative of any particular battle or regiment but I’ve tried to capture something of what it might have been like to fight in the trenches, the ruined landscape and civilization beyond.

“I am delighted to have been able to organise this and hope to raise as much as possible for such a worthy cause.”

The Garioch Art Group was established over 30 years ago by local painter Julia Metcalfe and meets every Thursday evening at the Garioch Community Centre in Inverurie. It is a self-help group which provides support and encouragement to its members through weekly meetings, workshops, events and outings.  The group holds an annual exhibition in Inverurie Town Hall during August.  This year the exhibition is open daily between Saturday 9th and 16th August 10am – 4.30pm.