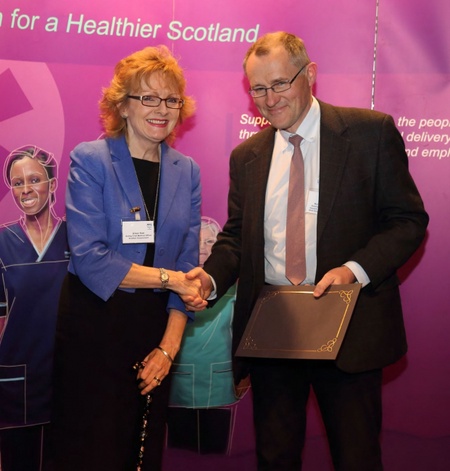 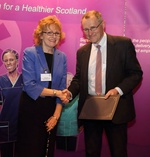 The awards are a new initiative from NES and were presented by Dr Aileen Keel, the acting Chief Medical Officer.

Jen - who has led medical education research in the University of Aberdeen since 2008 - received the Award for Scholarship. The award recognises a remarkable career evidenced by her election to key national roles and  committees.  She is the first non-medic to be elected as the Chair of Council for the Association for the Study of Medical Education (ASME) and is Vice-Chair of the only International Research Board in her specialty.  She is best known for her work into selection and performance in medicine, and is regularly commissioned by bodies such as the General Medical Council (GMC) and Selecting for Excellence Group (SEEG) to carry out work in these topics.

The author of more than 100-peer reviewed journal articles and book chapters, Jen is regularly invited to keynote at national and international professional meetings. Locally, she has led the development of a vibrant scholarly community in medical education research and evaluation, with multiple PhD studentships.  She also manages to lead a major undergraduate course on teaching and learning in Community specialties..

Ronald - whose method of leadership has been described as inspirational - was one of two recipients of the Process Development and Implementation Awards.

Whilst on a sabbatical year with McMaster University in Ontario in 2001, Ronald was introduced to Practice-Based Small Group Learning (PBSGL), and he quickly realised that this learning programme had huge potential to be used in Scotland.

On his return home, Dr MacVicar worked with a number of NES colleagues who were involved in the provision of CPD for GPs and in 2003, led a Scottish pilot of PBSGL, involving five groups of General Practitioners (GP) across Scotland.

The PBSGL programme has proven to be extremely popular and attracted GPs and other primary care professionals steadily throughout the next ten years with the membership now standing at over  2,100 GPs, pharmacists and practice nurses in 240 groups across Scotland in all 14 NHS territorial boards, with a small number elsewhere in the UK..