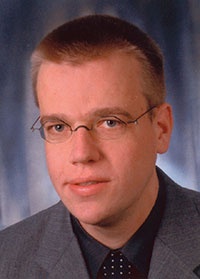 The prize was presented at the Society’s yearly meeting in Wuerzburg in Germany.

Dr Teismann received the honour together with Dr Walter Maetzler from the University of Tuebingen.

The scientists discovered the damaging influence of astroglia - glial cells in the brain and spinal cord - in Parkinson’s disease. The trigger of the harmful effect is a high concentration of the protein S100B, which is almost exclusively expressed by astroglia.

The researchers showed that removal of the expression of this protein was beneficial in a model of Parkinson’s disease. Less neurons died in the model, which are responsible for the production of dopamine. The more of these cells die, the less dopamine is available, and if more than 50% are dead, the first symptoms of Parkinson’s appear.

Together with other recent publications, Dr Teismann and Dr Maetzler’s results suggest, that the pathophysiology and possibly also the cause of the disease is far more complex than previously thought.

Along with the processes in the nerve cells, the surrounding environment of those cells plays an important role in Parkinson’s disease.

Dr Teismann said: “I am absolutely delighted to receive the award as it underlines the significance of our findings and the impact of the results on the research into the pathology of Parkinson’s disease. It also shows what an outstanding international collaboration is able to achieve.”