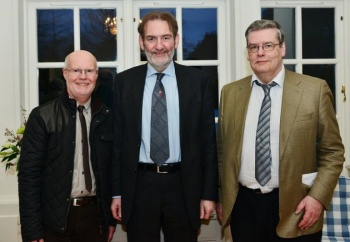 The University of Aberdeen recently recognised the service and dedication of 16 members of staff who celebrated receiving long service awards.

Among those celebrating long service are three members of staff who have each been with the university for 40 years.

John joined the history of art department a year after it was founded and is now a senior lecturer having dedicated his entire career to art history at the University of Aberdeen. He is an internationally recognised authority on Caravaggio and Baroque painting.

Alistair began work as a research assistant at the Rowett Research Institute in 1972 in the Veterinary Pathology department and spent time on secondment to the WHO to coordinate human trials in India evaluating the immune response to vitamin supplementation. During the last twenty years Alistair has continued to work in mucosal immunology and his dedication and commitment to this research has contributed significantly to the overall achievements and international reputation of the immunology team.

David started work as a trainee technician in 1972 in the department of medicine before becoming chief technician in 1984. Following the build of the Institute of Medical Sciences and the increasing number of research facilities on the Foresterhill site, David’s role became that of facilities coordinator and he was heavily involved with the build of the second stage of the IMS and its subsequent occupation in 2002. In 2003, he became one of three technical resource managers of the college.

Principal and Vice Chancellor, Professor Sir Ian Diamond, commented, “I am delighted to take this opportunity to show my appreciation to our valued members of staff who have given dedicated service to the University of Aberdeen.

“It is the commitment of our staff that has enabled Aberdeen to become recognised nationally and internationally for our achievement. To devote so many years of work to a single institution represents a significant contribution to our long term ambitions.”

The following members of staff were also award recipients, celebrating more that 25 years at the university: