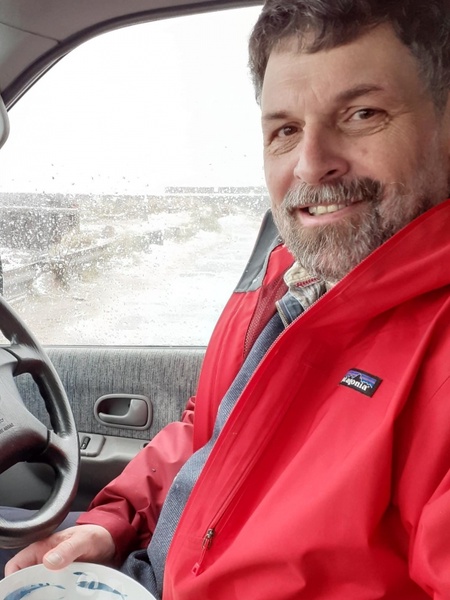 As Sepsis Awareness Month gets underway, Neil Curtis, Head of Museums & Special Collections, recalls his own brush with the potentially deadly condition that can be very hard to detect.

I’d had a small medical procedure one Monday in February and as the week progressed, I’d felt fine. I had a full diary and by the Friday was looking forward to going running the next day – that’s how well I felt.

But when I woke on the Saturday I wasn’t feeling quite right. I’d been back and forth to the toilet during the night and in the morning noticed my urine was pink. When I’d had my procedure, I’d been warned there was a small risk of infection, and so I thought it was probably that. I called NHS 24 and was told to collect an antibiotic prescription.

However, by 11am that morning, I started having tremors, and was then sick. My hands were sporadically shuddering, and I could barely use my phone as I couldn’t control my fingers. That’s when I thought that this feels like sepsis, which is a life-threating reaction to an infection.

Even though I didn’t have all the typical symptoms I already had an awareness of sepsis. Because my job involves working with the anatomy and pathology collections, I have become more aware of medical matters than I would have expected!

My temperature wasn’t significantly high, and I wasn’t feverish or confused. The tremors stopped after a while, and I could so easily have decided I was just feeling rough, gone to bed, and waited to see how I felt the next day.

Thankfully I went to hospital because by the afternoon I was in septic shock and getting worse. I was given an oral and an intravenous antibiotic to tackle the infection, oxygen, opiates to control pain, and saline solution to increase my blood pressure. Later that evening, I was moved to the High Dependency Unit (HDU) as my blood pressure continued to drop and given further treatment to try to control my blood pressure.

I was watching my numbers, seeing my blood pressure drop to 55/33 and my lactates rise to 7, which meant that I was at risk of suffering organ damage because of how little oxygen was getting to tissues. I learnt a lot! Despite that I didn’t feel scared – indeed I had a huge sense of relief when admitted to hospital. However, it was horrible for my family who were not there; all they knew was that I was in HDU with extremely low blood pressure, and that septic shock has very high rates of mortality or organ damage.

I spent two nights in HDU and was then moved up to a ward before getting home after five days in hospital. Flowers, messages and chocolates from friends and colleagues definitely helped my recovery!

Today I feel very glad I spent lockdown starting to run as I was fitter than I had been, which I am sure helped my recovery. I was back at work within a couple of weeks, but it took a good two months before I started feeling back to anything like normal, and three months before I felt fully recovered.

Sepsis is treatable if caught quickly. I’d say to anyone that if something in your body suddenly changes, it’s so important to take it seriously. While I wish I’d been quicker off the mark in going into hospital, I am aware I’ve been very lucky.

Find out more about Sepsis