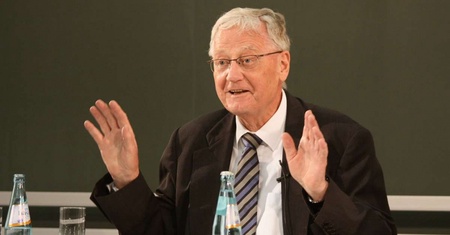 Eberhard Jüngel, who received  from the University of Aberdeen in 1985 his first honorary doctorate when James B. Torrance was the Professor of Systematic Theology at the University, died on 28 September 2021 in Tübingen, Germany.

Jüngel, one of the greatest German Protestant theologians of the twentieth century, was born in Magdeburg on 5 December 1934, to decidedly non-religious parents. When he was preparing for his Abitur (A-level) examinations in his home town, at that point part of the German Democratic Republic, he was expelled from school because, due to his outspokenness, he had come into conflict with the educational authorities of the socialist state.  Jüngel discovered the Protestant church in the GDR as the only environment in which the search for truth, and the speaking of the truth, were not just possible, but positively encouraged. Jüngel studied theology first in Naumburg and then at the Sprachenkonvikt, a theological seminary, in (East-)Berlin. He then ‘absconded’ to Zürich and Basel, where he spent a semester as a student of Gerhard Ebeling and others. In Basel, he met, and became a pupil of, the ‘Church Father of the Twentieth Century’, Karl Barth. He then returned to Berlin and received his doctorate in New Testament Studies in 1961, the same year that the Berlin Wall was erected. His doctoral thesis was entitled Paulus und Jesus: Eine Untersuchung zur Präzisierung der Frage nach dem Ursprung der Christologie (Paul and Jesus: An investigation to clarify the question of the origin of Christology). He received his Habilitation, his second doctoral qualification, in Systematic Theology in 1962, also at the Sprachenkonvikt. In the same year he was appointed to a New Testament lectureship at the same seminary, and, in 1966 and with the permission of the GDR authorities, accepted a full professorship in Systematic Theology and History of Dogma at the University of Zürich.

In 1969, Jüngel moved to the chair of Systematic Theology and Philosophy of Religion at the University of Tübingen (concomitantly serving as Director of the Institute for Hermeneutics), from which position he retired in 2003. His time in Tübingen was central to the development of his theology and his service as an academic teacher. His opus magnum, Gott als Geheimnis der Welt (God as the Mystery of the World), was published in 1977 and explores human speaking and thinking about God in light of the cross, as well as the nature of God as envisaged in Scripture, theology and philosophy. At the height of his career, teaching on the key areas of Systematic Theology, he drew 1000 and more students to his lectures, twice a week every week, semester after semester. At the opposite end of the spectrum of teaching, he conducted Oberseminare, small conversational seminars, at his home, reading theological and philosophical texts with a handful of advanced students. From 1987 to 2005, he was the director (Ephorus) of the Evangelisches Stift in Tübingen, a theological college of the Württemberg church amongst whose alumni are Hegel, Hölderlin and Schelling.

Jüngel was awarded some of the highest honours of the Federal Republic of Germany, among them membership of the order Pour le Mérite and the Knight Commander's Cross of the Order of Merit (Bundesverdienstorden). Apart from the honorary doctorate received from the University of Aberdeen, he was also awarded honorary doctorates by the universities of Greifswald and Basel. John Webster, Professor of Systematic Theology at the University of Aberdeen from 2003 to 2013, was Jüngel’s premier interpreter and translator in English and edited a Festschrift on the occasion of his 65th birthday in 1994 (The Possibilities of Theology, Edinburgh: T&T Clark, 1994).

His work, dedicated to finding new ways of making the Gospel speak to humanity in the face of nihilism and to encouraging human beings to conform to the humanity of Christ, will continue to inspire generations of Christians in academe and beyond.