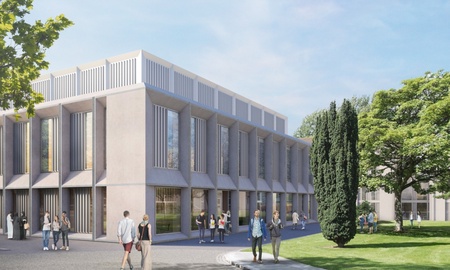 The University has lodged a planning application with Aberdeen City Council to create a new home for the Business School.

The application, which includes illustrative examples of the proposed design which are highlighted in this press release, marks a significant development in the University’s plans to regenerate its Old Aberdeen campus through a package of ongoing and proposed projects representing a combined investment of almost £100 million.

The plans will see the Business School relocate from its current home in the MacRobert Building to a new single-site home on the site of the currently dormant Johnston Halls, which will undergo a major refurbishment.

Meanwhile, plans to enhance facilities in the immediate area of King’s College (King’s Quarter) include a new flagship atrium and improvements to the interiors of a number of areas, revitalising the historic centre of campus with quality new teaching and learning space.

The proposals were developed by a Programme Board led by Vice-Principal Alan Speight with representation from Schools, AUSA, Professional Services and other key users who have been widely consulted.

Two Project Management Groups - one for the Johnston Halls redevelopment and the other for King’s Quarter – are continuing work to define the detail of the redevelopment in consultation with key users.